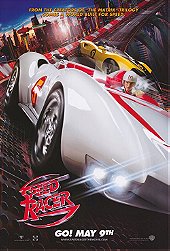 Hey, people! Was The Matrix too much of an understandable sight for sore eyes? Then have an eye-bleedingly good time with Speed Racer, because no-one cares about plots or epilepsy!

Speed Racer, based on the retro anime, wasn't that bad, but wasn't that good either. There are many people who aren't real critics who say this film is fun. Sure it may be fun, but guess what had to ruin it?

In a much-too-cartoonishly-colourful world where racing is a big thing and human names are just made up of words (mostly), Speed Racer is the fastest racer of all. Ever since he was a kid, Speed wanted to be a racer. When he was old enough, his dream came true. Now, well, I don't understand what the hell actually goes on in this movie. The film 's length doesn't help at all. All I remember is that the Racer family goes to a factory where Speed meets someone who is one of the villains of the story, he starts racing again, he goes to Asia, he competes with Racer X, he stays in a new home, he races again, he loses to Rex, he races yet again, he wins (OF COURSE!). It's just too complicated!

Here's what the pros are. The casting is good and some of the characters are likeable. Spritle (another weird name) and Chim-Chim the chimpanzee, for instance. They made me laugh. The acting is okay, though sometimes cheesy (this happens with Spritle sometimes). The music by Michael Giacchino was great, as his works always are. I loved the stunts, too. The special effects are decent, but I think you all know what ruined it.

And now the cons. The plot is quite misunderstandable. You wouldn't know where the hell this film was going. The colours were fit enough for an LSD trip, and look like they came out of Spy Kids 3 or Sharkboy and Lavagirl. The film is rated PG, though there's a few PG-13 jokes, such as the funny scene where Spritle gives the middle finger. Family fun! The costumes are just plain silly, for example Speed's father wears overalls in one scene that make him steal the appearance of Mario. The blue-screen effects are pretty weird. Some of the singing of the catchy movie version of the theme song could've been more appealing, too.

But the biggest con of all is how insane the special effects are. There's more CGI than Son of the Mask and even more dizziness than Cloverfield. Trust me, I got pretty dizzy from watching it. I watched it online since I couldn't be bothered to rent it, but thank God I didn't see it at the cinema or the IMAX. It also could cause seizures. They even have BLACK AND WHITE FLASHING LIGHTS, which could kill people that are epileptic. Some shots of the races are too long, because they just quickly zoom in to each character at times instead of just cutting to them, which is just evil. In some global cinemas, Cloverfield got a warning for the dizziness that it can cause, but why not Speed Racer? No wonder why it didn't do well in the box office. It's a good thing that the video game for this movie got a warning about seizures.

Overall, Speed Racer is a pointless rollercoaster ride of a movie, and I hate rollercoasters. The best viewing experience of the film is on a screen smaller than an HD one if you want to enjoy and survive through it. If it didn't try to make me feel sick, I would've loved it more. But since I was one of the 28% of the RT community that didn't like it as much as the other 72% which includes my friends, GODDAMN YOU, LARRY & ANDY AND YOUR DIZZIFYING DIRECTING!