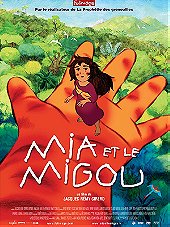 On Sunday, March 7th, I went to the National Film Theatre in London to see an animated film from France called Mia and the Migou. It's about a tan-skinned, long-haired (but not for long) girl named Mia who finds that in the rainforest she lives near, there may be monsters. Soon after, she encounters one, a big, friendly one. He calls himself a Migou, and when he speaks, he has a mouth on the front and back of his head. It's not everyday you see a monster like that! She then finds that there is more than one Migou, and this is where the French gain the brains of the Japanese - they turn big and gain the ability to use their eyes to rescue anyone from falling. She also makes friends with an ordinary French kid whose evil father wants to build a hotel where the magical tree that gives the Migous' life is. It's a strange, flawed story, I know, but if Hayao Miyazaki could bring so much weirdness, why not? Plus, it's not just made in France, but also in Italy and Taiwan, a country near Japan, so it's no surprise.

It may look like it's for kids, but it isn't necessarily for kids. There is some mature humour and thematic elements. The subtitles didn't help, either, because whoever subtitled it added cuss words like "sh*t", "arsehole" and "bastard"! Could you imagine if they did that with My Neighbour Totoro? "Holy sh*t, a bus that looks like a cat!" But still, it's a nice, vibrant, colorful and highly imaginative surprise with a unique style of animation. It's also probably the most environmentally friendly animated film since WALL-E! Reading this, you may be thinking of Avatar. It has an environmental message, a jungle, fantasy creatures, helicopters, a magical tree destruction and a bit of "nature strikes back". And believe it or not, this film came out in France exactly a year before Avatar! Oh boy, have I pissed off you Avatar haters. D: