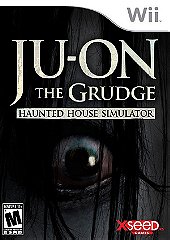 Even as a gentle reviewer of survival horror games, I struggle to find many positive things to write about Ju-On: The Grudge (Nintendo Wii, 2009). So I will start, benignly, by describing the game's critical faults and end with a few favorable points (and few they are indeed).

To begin with, the controls were frustratingly out of sync with my movements. You control one of four (five if you bother to unlock the game's secret final stage) characters in the first person, moving about by holding the B button. You control the flashlight you hold using the Wiimote pointer. But the pointer does double duty as it's also the way you turn in the game. And that design choice was horrible. Turning gently to one side or another sends the flashlight wildly out of control, which in turn causes you to lose all control of your character. The only remedy is to wait for the Wiimote to restabilize on the screen. Turning and flashlight control should have been independent things, for the love of God. But Ju-on doesn't require the Nunchuk, so I guess there was no other option for turning the character. The controls are a game-long struggle, just so you know.

As you play, you are constantly losing battery power, which is this game's take on a life bar. You find spare batteries as shimmering objects throughout the environments. Honestly, you won't be too troubled by the constant search for spare batteries because they are conveniently strewn along your path, not hidden. But reaching a shining item from, say, the other end of a room takes a short eternity because the characters move at a maddeningly slow pace. And there's no running. Everything is a slow, slow, creep.

Also in each environment are cleverly hidden secret items. You keep a running tally of these and can complete each scenario's secret item list with multiple playthroughs. Even if you die, the game will save the item in your archive as long as you found it before dying.

As for dying, this happens automatically if you run out of battery power or fail one of the "action" sequences. These entail copying motions that flash on the screen or keeping a cursor within a shrinking circle. Fail these, and you fail the level.

There are plenty of little non-action scares everywhere in the game, so exploring is kinda not a waste of time. But these "boo!" moments aren't really that great. The flow of your tasks is also somewhat confused by the fact that you must witness some of these scares before others open. Generally, the game will provide some kind of hint, even if it's not a great one.

In terms of the story, Ju-on: The Grudge gets a big fat fail. You have no idea what you're doing or why you're doing it (unless you've recently seen the movies, which I have). If you remember (or give a shit), anyone who comes in contact with the grudge is damned. Each of your four characters, a delivery guy, a security guard, etc., has somehow crossed paths with the grudge girl (I forget her name) or Toshio (the cat-boy ghost). So, no matter what you do, your characters die. The last level is the haunted house. And the ending, well, just fucking sucked.

As for what Ju-On: The Grudge did right? It didn't do a terrible job setting a dilapidated atmosphere: you play in run-down, derelict buildings, for the most part at night and all by yourself. I honestly don't remember any BG music, so, if there was any, it was totally forgettable. (I played and beat the game, watched the movies, then played and beat the game a second time.) Some of the peripheral scares in the game (ambient noises, scratches, blood stains, etc.) weren't half-bad. But they weren't exactly half-good, if you know what I mean. The hidden items feature was good. Probably the most positive thing of the whole game. Well, that and it was a short play (less than 4 hours for a complete slaying). Oh, and there's also a completely stupid haunted house mode that tests your "scare factor." Don't worry, no matter how un-scared you are, it'll call you a sissy girl. Which, by the way, isn't sexist at all, is it?

What went wrong? For starters, this game should've used the Nunchuk and the C stick for moving. Next, the story of the four characters should have been developed at least a little bit. I mean, you meet each character for about 10 seconds before you start. Musically and SFX-wise, the game was completely blah. Finally, everything was repetitive. Re-play value is virtually non-existent because the same scares are done in the same order every playthrough. No randomization or anything. It's the same adventure, the same boring experience every time. So, get it only if you're a die-hard collector and don't mind forking up serious dough (like $50-$80) to play this. If you kinda liked the movie and wanted to play this, seriously, let me save you the grief and money. For a survival horror, it's not scary and for a video game in general, it sucks.