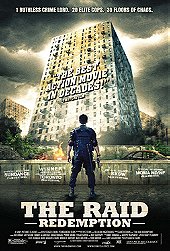 Now, you might be wondering "TCJ, why a 7 out of 10? The action scenes are worth a 10 out of 10!!!" But Let's make one thing perfectly clear: I don't put style over substance when it comes to a review. But you know what? I don't hate this movie.

A 7 out of 10 would indicate that I had fun with it. I love the action. The problem is that it is mostly a style-over-substance case. Granted, it had a decent enough plot: Kick a crime lord out of the apartment complex he is in control of. At first you might think that this is a ripoff of Dredd, but this film was originally released 2011 in Indonesia. Dredd was wide-released the following year.

Character development, while somewhat present, gets a bit dull at times. I kind of wanted the development to be a little bit more engaging. Maybe a dark flashback about the reuniting brothers. Maybe a little more showing exactly how the crime lord took control.

And that's the other problem, the characters names are hard to remember, but hell that might be just me.

The good thing about this movie is something I have previously. The choreography is truly beautiful in a brutal way combined with camerawork that flows with it almost perfectly. It's just enough to engage someone looking for a good time.

It may not be the best film of 2012, or the most well-thought out, but it certainly is worth the look.