You Can Check Out, But You Can Never Leave 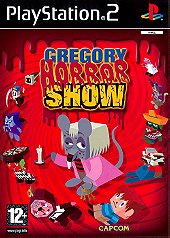 Gregory Horror Show: Soul Collector (Capcom, 2003) was a brilliant PS2 offering that was, like so many great games of the last two gens, never localized to the United States. Like the 1999 CGI cartoon it is based on, the video game comes from the distant shores of Japan. It is available in PAL format, where (in the U.K. version) the voice acting took on a distinct American flavor. So why this adorable and charming little gem never came to American gamers is utterly beyond me.

You play as a nameless character (boy or girl, your choice) who is staying as a guest in the Gregory Hotel. You have been assigned by a character named Death (a Grim Reaper from Jersey Shore) to retrieve all of the lost souls in the Gregory Hotel. These souls are held captive by the other guests of the hotel, twelve in all, and it is up to you to scheme ways of taking them.

The game is divided into "nights" in which you can steal up to three lost souls before having to turn in for the night, meet Death in your dreams, and give him the souls. When you do this, new guests arrive and the process begins again. But here's the fun part. Before you steal a guest's soul, that guest will flee from you whenever you appear. The only way you can come up with a way to get the souls you're after is to spy on each and every character and learn their whereabouts and their weaknesses. Then, you must devise a clever way, based on their schedule and your recon, to separate them from their soul. Once you manage to do all this, they no longer run from you but at you! And if they catch you, you get to (I mean you have to) watch their Horror Show, which is a goofy cutscene of how they get their revenge on you (usually, taking a quarter to a half of your life in the process). And if you were reckless enough to have a soul in your possession when they catch you, then you lose it! Not only that, but now you're depressed and have to find medicine.

Because you're in a crazy house, you're mental gauge (i.e., life bar) is constantly decreasing. You must replenish it by eating herbs or by reading one of the dozens of books you can find in the hotel or buy. Reading increases your mental strength and decreases the rate at which your life diminishes. But you can also get tired, which leads to headaches, which leads to nervousness, which leads to melancholy, and so forth. You must address these issues in the real-time of the game. Everything follows a 24-hr pattern that repeats, and as you spy on your fellow guests, you keep a memo log of these patterns that will help you when you formulate your plan.

So, basically, Gregory Horror Show involves a good deal of exploration, inventory management, and sneaking. You are also responsible for keeping track of the time and your own health issues. There are plenty of hidden and secret items throughout the hotel (which gradually opens up as you progress), making exploration fun rather than tedious. The map (on normal difficulty) is more like a radar, showing you the movements of each guest to help you plan your attack. There are also a few characters who give you lots of general hints, including your next door neighbor, the Neko Zombie (zombie cat) and the hotel's manager, Gregory the mouse.

This entire experience is wrapped up in a cute, chibi-like package that your inner kid will appreciate for a good 13 hours. I wouldn't call this an easy game (given all the groundwork you have to do before capturing each soul), but it is not frustratingly difficult by any means. Overall, the game felt quite polished. There were lots of gamer-friendly touches and a minimum of mechanical distractions (sometimes the controls get you in trouble when you're being chased as the camera angle changes). It was a very smooth ride, and it's too bad a whole continent of people never got to play this game.