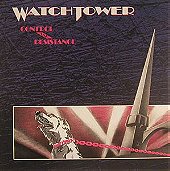 The social commentary is upped on their second album; Chernobyl, criminal propensity and maintaining social order some of the subjects covered. The perceived shift toward a more `mature` approach enamoured many with the band, some claiming it superior to the debut. Truth is, I was never convinced by `Control & Resistance`, and rediscovering it years later brought back the bugbears I had when I first heard it; namely the pompous lyrics, the dearth of flair and energy and - with the exception of the title-track - the widdly and awkward arrangements. It`s almost as if the band were content to let the themes and commentary themselves do all the talking, rather than making an effort to craft some really good songs.

When a band as promising as Watchtower creates an album as mediocre as `Control and Resistance` it can only be considered a disappointment. I would point anyone interested in hearing this band to the aforementioned debut, as this superfluous sophomore release is destined to go in one ear and out the other.