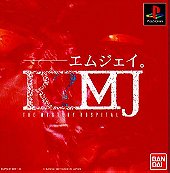 R?MJ The Mystery Hospital is a 1997 Bandai release for the Playstation best described as a critique of postmodern minimalism in video game art...okay not really. R?MJ, actually, is just a run-of-the-mill first-person point-and-click horror (with Engrish). It is beautiful, to be sure, and quirky, but nothing outside of the mold.

You play as Hajime, one of five characters who have become trapped in a general hospital following a terrible accident that has sealed you in. Or is it really a general hospital? One of your party, Tomowo, has come down with a mysterious illness and you spend the first disc rescuing him and another friend, Aya, who is a nurse. As Hajime, you are free to roam about the hospital's upper floors and basements to search for the necessary items and antidotes. These tasks are performed more or less linearly and, when the game senses you are lost, you are given special "sense hints." With the press of the cross-button, you use one of your five senses to gain extra information about your surroundings. These hints (which arise in the form of spoken clues from your companions) pop up at specific clickpoints. So you're never completely in the dark (assuming you know enough Japanese to understand "Hey, what's that smell?!" or "Do you hear that?"). In any case, you can always just push the cross-button whenever you want.

As you progress through the mystery hospital, you learn that you are being observed by a mad scientist and his hilariously unintelligible (Engrish) henchman, Robert. After surviving the infection and getting through disc one, you must face this madman and Robert in disc two. The locations for the second act involve caverns and ruins beneath the hospital, which are connected to its secret laboratories. You are harassed by diseased, mutated creatures from time to time, and are tasked, once again, with saving your party by judicious use of your inventory.

Because this game was never localized outside of Japan, you will have to navigate your way through Japanese dialogs and cutscenes. Fortunately, this is not much of a problem. The biggest puzzle in the game comes before the disc change, and it uses visual, not spoken, hints. The other puzzles in the game are fairly straightforward. Match an antidote to the right vector. Use the gun item when you are cornered. Find the instruction manual for an item before you know how to use that item. Stuff like that. There are only 22 items in the inventory and a lack of Japanese knowledge will not significantly limit you there. The game also makes use of some timed puzzles, but you are allowed plenty of tries. So, overall, R?MJ is not a real nutcracker. In fact, getting through the mystery with limited Japanese ability was sort of fun.

Graphically, I can't complain too much. Like many first-person point-and-click adventures, you are guided along a set path between clicks and are shown what the developers want you to see. It's not exactly an enormous game world, but it gets the job done. I will whine about the character models, though. They were horrible. Musically the game was also weak and terribly mistimed. And I can't exactly say the voice acting was a high point, either.

In terms of the game story, you are looking at a survival mission with catacombs and mutants thrown in the mix. It isn't too far from the overlooked PSone scifi horror-adventure Overblood (just without any of the moral implications of that game). R?MJ isn't deep. And it doesn't offer much in terms of re-playability, except for a code that opens a gallery of some shots of the nurse character. In the end, good triumphs over evil (even evil in the name of science!). Bla, bla, bla...it's been done a million times.

But, if you are a fan of the first-person adventures or a horror gaming fanatic (like me), then go for it. Like I said, there is no need for complete Japanese mastery to play and beat this game. And if you get stuck, there's even an internet FAQ you can use. You won't say it was the best game you've ever played, but, hey, it's certainly not a bad way to pass 6 or so hours if you want some oldschool fuzzies.