Potent, but far from perfect 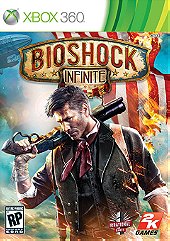 Bioshock Infinite is a fine game, but perhaps not as fine as the reviews would lead you to believe. It crafts an engaging tale and the shoot-em-up gameplay with bio powers is what we've come to expect from the series, but it has its fair share of flaws.

For me, the gameplay felt like a step back from the first two games in many ways. The limitation on two equipped weapons seemed needless and was frustrating at times. The Sky-lines, while visually incredible and providing some of the more exciting moments of the game, were not well integrated with the combat engine. Attempting skyline strikes was more trouble than it was worth and shooting while zipping around the skylines was often a waste of ammo.

As a game world, Columbia is undeniably creative and unique, but not nearly as engrossing as the twisted halls of Rapture. With its dark atmosphere and frightening half-human, half-monster enemies, the first Bioshock was a shooter/horror hybrid that could keep me on pins and needles. Infinite rarely came close to that feeling, and most of its enemies were cartoonish in nature (the one exception being the frightening "Siren" that could resurrect seemingly endless dead foes.)

The plot is the strongest aspect of Infinite, but it has problems as well. (Minor spoilers in the next two paragraphs.) Like all plots that involve time travel and alternate dimensions, Bioshock Infinite creates its own logic to operate on. This, however, leads to many "why?" and "why not?" questions that can only be answered with "plot convenience." The twist in the original Bioshock was a more simple, elegant device and as a result it felt a lot more authentic than the one in Bioshock Infinite that relies on a tangled web of pretend physics. This, however, I was happy to overlook in exchange for the emotionally powerful ending that the game offers; an ending which is undoubtedly one of the best of this generation and maybe one of the best ever in videogames.

What I was not willing to overlook is the giant false equivalency that the game creates halfway through its storyline. The game goes to great lengths to show how the powerful figures of Comstock and Fink have created a brutally oppressive, dystopian world of racism and worker abuse with a slowly building resistance movement in the background. Then, suddenly, when the resistance springs into action, they're immediately painted as blood thirsty terrorists who are somehow as bad as the oppressors they're revolting against. This is done for no good reason but to give your main character more targets to shoot at. That was a major disappointment and sacrificed a good deal of integrity that the story might have had. While the major theme of Bioshock has always been extremist ideologies, the writers incorrectly defined resistance to oppression as an ideology. It is not.

While I'm offering a fair amount of criticism for this game, I still greatly enjoyed Bioshock Infinite. This is yet another game where the story was likely stronger than the gameplay that brought it to life. Critics of narrative games love to endlessly point that out and say "YOU'RE DOING IT WRONG!" What those "gameplay is all that matters" fanatics fail to realize is that while the medium of videogames will always have greater artistic potential to create interesting new methods of gameplay, videogames will ALSO still have the potential to tell stories more immersive than film and literature can hope to, because they make you an active participant in the story rather than just an observer. Even if the way you can interact is limited, or the "choices" aren't really choices, there is still great value in the ability to shift someones perspective from passive to active, and Bioshock Infinite takes great advantage of that.