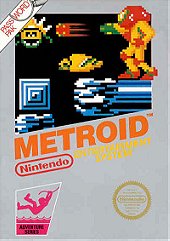 Metroid on the NES was one of the first games to give off real challenge like the Legend of Zelda. There was nothing wrong with this game. There are 3 stages to the game: Brinstar, Norfair and Tourian. There are 3 bosses in the game: Kraid, Ridley and Mother Brain. There are 5 possible endings to Metroid, all featuring Samus in various stages of un-dress: The slowest time featured an ending were Samus turns her back towards the player. The second slowest time featured an ending were Samus in her Power Suit waves to the player. The middle time featured an ending were Samus removes her helmet. The second fastest time featured an ending with Samus in a leotard, and the fasted time featured an ending with Samus in a bikini. After that the game restarts and the player keeps most of the power ups they collected during the previous game and Samus with a leotard of bikini, witch ever the unlocked. There are also "hidden worlds" thought to be for the best of players, and it involves the trap hatch glitch were the player can become stuck in the door. Once activated the player can jump through the wall and into various rooms filled with several, indestructible enemies including Zoomers and Mother Brains. The JUSTIN BAILEY password was a password that was not intended for use in the game. When used the player starts as leotard Samus at the elevator between Brinstar and Norfair. The NARPAS SWORD0 000000 000000 code was a code purposefully built into the game that starts the player at Brinstar with the Varia Suit, 255 missiles even though the maximum is 205. The player is indestructible and will go to 39 health when they reach 29. The player starts with the Wave Beam, though when it hits it has a similar effect as the Ice Beam. In conclusion Metroid has the greatest plot and game play OF THEM ALL!!!!!!!!!!!!!!!!!!!!!!!!