I'm a Doctor, Not a Butcher. 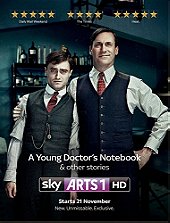 BBC always seem to make great shows that only last a handful of episodes and A Young Doctor's Notebook is one of those shows.

Based on a collection of short stories by Russian writer Mikhail Bulgakov, the show revolves around a Russian doctor looking back on his past. The first episode starts out in the doctor's office in 1934 with the doctor reading an old notebook from when he was starting as a doctor in a remote Russian village in 1917 while a couple state officers rummaging through his office belongings.
The rest of the show is set mainly in 1917 with the young doctor dealing with country patients and growing as a doctor with flash forwards to 1934 and the young doctor interacting with his older self.

Jon Hamm is great in his role as the older doctor with his normal no nonsense stature but wise as a whole and Daniel Radcliffe is really proving his not just Harry Potter but a true actor. All the other actors in the show give life to these short episodes that truly rounds out the story and make it almost real.

Like lots of BBC shows that have short life spans A Young Doctor's Notebook ends with a bittersweet ending but is so complete that I was left wanting more but also feeling it didn't need more.