Screw Citizen Kane, THIS is a masterpiece! 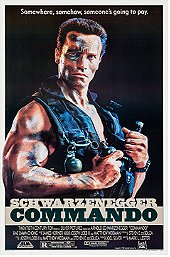 "All fucking hell is going to break loose..."

Though I walk through the valley of shadow and death, I shall fear no evil; for Lord John Matrix will protect me; his big fucking guns and huge muscles, they comfort me.

In the beginning, there was the masterpiece known as Commando. And the God of '80s Action Excess did look upon it and see that it was good. And lo did Arnold Schwarzenegger massacre hundreds of mercenaries in displays of awesome ultra-violence, and Alyssa Milano did rejoice. Amen. 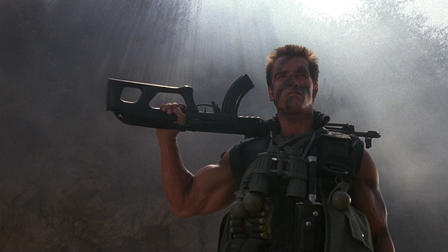 After the triple play of The Terminator and both Conan films, Arnold Schwarzenegger graduated to top billing with Commando; a classic '80s action movie that fetishises explosions, violence and guns, in addition to containing an assortment of evil villains, cheesy one-liners, big guns, bigger guns and enough dead bodies to keep a mortician's convention busy for days. It was produced by illustrious action super-producer Joel Silver and written by distinguished action writer Steven E. de Souza (48 Hrs., Die Hard), not to mention that the primary star is none other than the iconic Arnie. On any level above that of red-faced guilty pleasure, there's simply no way to defend Commando. It's a gloriously primitive and cartoonish action vehicle that makes absolutely no bones about its absurdity. It never pretends to be anything other than a simple-minded exercise in vicarious violence. Its heart and soul is best summarised by a line of dialogue - a female character, while witnessing two über-macho behemoths engaged in mano-a-mano fisticuffs, exclaims "These guys eat too much red meat!"

Schwarzenegger plays Colonel John Matrix (complying with the First Law of Early '80s Action Movies, this is one awesome name); a former special ops soldier now retired and living in a secluded cabin with his daughter, Jenny (Alyssa Milano). Matrix believes his old life of violence, gunfire and post-mortem one-liners is over, but a former dictator is unwilling to let him rest in peace. This dictator is Arius (Dan Hedaya), who, with the help of the psychotic soldier Bennett (Vernon Wells), enacts a plan to regain power in the third-world hellhole he was ousted from. They wish for Matrix to do their bidding, and they kidnap his daughter to convince him to comply with their instructions. But there's one thing they forgot: nobody fucks with John Matrix. 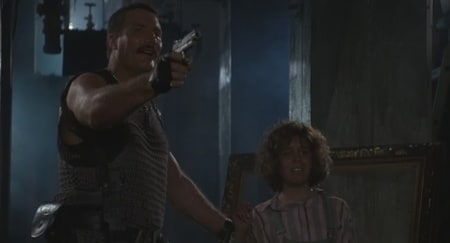 It's the way Matrix dispatches with the villain's original plan and summarily devises his own that makes Commando so exhilarating. Director Mark L. Lester (Class of 1984, Showdown in Little Tokyo) serves the action spectacle straight-up, with little in the way aesthetic flourish, emotional bracketing or even downtime. The makers realised that Schwarzenegger's primal screen presence needs little accoutrement, and the action hero is, therefore, just given the opportunity to bulldoze his way through the narrative (and literally through a sporting goods store at one stage). Matrix is less a character than a force of nature, and the cutesy scenes meant to establish his loving fatherly nature with Jenny at the beginning of the movie are impossible to take seriously. ("Why don't they just call him Girl George? It would cut down on the confusion.") Matrix only makes sense when he's armed to the teeth with an assortment of weaponry, blasting his way through hundreds of henchmen like an automated turret when given a line of immobile enemies to dispatch (there's no reason to point out how convenient it is that he has a limitless supply of ammunition, and seems to find bigger weapons just by looking down). Commando simply surges forward from action set-piece to action set-piece, pausing only for one-liners and shots of Alyssa Milano sneering at her captors. The film lasts less than 90 minutes, but one could spend two hours talking about it because it contains so much cool stuff.

Commando works on just about every level, but it's the script that makes it such a gem. Classic one-liners range from "Let off some steam, Bennett" (after Bennett is impaled with a steam pipe), "I eat Green Berets for breakfast. And right now I'm very hungry" and the classic "I let him go" (after dropping some poor bloke off a cliff). Gold. Pure gold. Commando is the movie that helped to forge and solidify the Schwarzenegger action movie persona. At the time of this movie's release, the former Mr. Universe was known as a cyborg from the future and a loin-cloth-clad barbarian. He had already uttered the immortal "I'll be back" catchphrase (in The Terminator), and Commando immediately announces its self-aware silliness when Arnie repeats this line to the movie's central villain. This is just one of the many one-liners, puns and badass phrases peppered throughout the film, making the consciously bad dialogue second in volume to the number of bullets fired during the scant runtime. 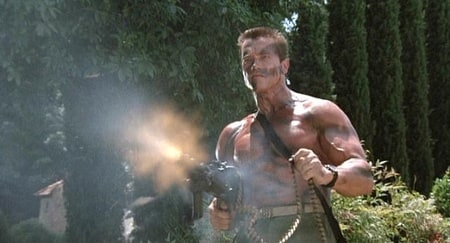 De Souza's script is pitch-perfect, Lester's direction is immaculate, Matthew F. Leonetti's cinematography is beautiful, the editing is sharp and the score by James Horner is one of the coolest you'll ever hear (not to mention it gives even more power to the unique visual style). The acting, meanwhile, is spot-on right down the line. Schwarzenegger is enormously likeable and funny, and he's an awesome physical actor. Arnie reportedly performed nearly all of his own stunts (this included jumping through windows, doing gruelling fights and hanging onto a plane's landing gear as it travelled at 65 miles an hour), and the price was merely a dislocated shoulder and some stitches...what a guy. Vernon Wells's performance is classic - the actor was fresh from Mad Max 2 and Weird Science when he stepped into the role of Bennett, and he's right at home with this goofy material. The banter between Wells and Arnie is downright iconic. Rae Dawn Chong as the token female confidently fulfils her duties, while Milano is easily likeable as Matrix's daughter.

The action genre reached its pinnacle in 1985 with Commando. No movie in the ensuing years has been able to wield a proper combination of violence, awesome one-liners and absurdity like this vintage Arnie vehicle did. Flicks like this are also an endangered species due to the contemporary evolution of the genre necessitated by dismissive critics. With action movies becoming increasingly more complex (with fewer action set-pieces), this is a reminder of a simpler era of moviemaking. Sure, Commando could be called a dumb movie, but those deriding it with such harsh words are not accepting the film as what it was intended to be. Unfortunately, a planned sequel never materialised despite de Souza writing a draft (and Frank Darabont doing revisions on it), but the script is available to read online and it is highly recommended. Don't believe the snobby, self-important film connoisseurs who claim that Citizen Kane is the best and most essential film ever - Commando is the film you MUST see!!!

I love this movie. I love it with an unhealthy obsession.