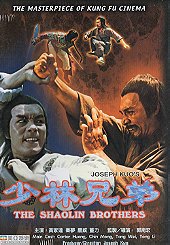 Carter Wong is an evil Ching prince that is trying to stop Ming rebels from delivering information that would bring down the empire. There's a personal vendetta and some Taoist hijinks in the mix, too.

Carter Wong once again impresses even though he just bookends the movie. Not sure why this is called THE SHAOLIN BROTHERS, because there didn't seem to be any Shaolin (the two little seen protagonists did share the same sifu, however). The plot's a bit incoherent, but the threads do eventually converge. It's a basher with plenty of sword and mixed weapon play. The fights are plentiful and energetic (lots of jumping and at least once, pretty fantastical). Some of the cuts/editing during the fights are jarring. This seems to be how Kuo made his movies, though. I've sat through THE 18 BRONZEMEN 1 & 2, THE 36 DEADLY STYLES, DRAGON'S CLAWS, and now THE SHAOLIN BROTHERS and all the fights have been shot in the same manner. The corpse gag predates THE SHADOW BOXING (SPIRITUAL BOXER, PART II) by five years. Funny how no one really got the supernatural corpse/vampire stuff right until Sammo (SPOOKY ENCOUNTERS/MR. VAMPIRE) came along. Solid, entertaining effort.