A twinkie in my eye. 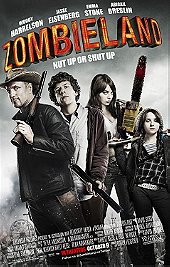 In the horror comedy Zombieland focuses on two men who have found a way to survive a world overrun by zombies...

Zombieland - The world is once again ravaged by a deadly virus that turns the world's population into hordes of fast running undead cannibals. The main character is Columbus (Jesse Eisenberg), a squeamish nerd who has survived so long because of strict adherence to a rulebook that neatly skips over most of the mistakes horror film characters fall prey to. He soon meets Tallahassee (played with masculinity, toughness and a crazy sense of humour, by legend Woody Harrelson), a man with a savage talent for killing armies of zombies. They meet two untrustworthy young women (Emma Stone and Abigail Bresnin) and the four slug it out joyfully in an apocalypse of enormous proportions. 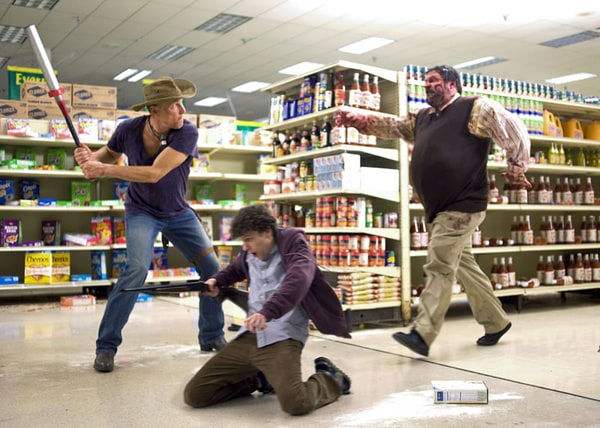 The film marvellously captures most of the love most teenage men have for the zombie scenario. In a word or two: legitimized anarchy. If the story lacks direction for any reason it's this. One of the best sequences (of which there are several) shows the foursome breaking everything in a shop just because they can. The jokes come often and are amusing, with pop culture references aplenty. One cameo made me fall in love with the film. There really is nothing like the comedy greats of the 80s and 90s, is there? The opening credits sequence was awesome really letting us inside this zombie infested world, the slow motion and chaos plain to see.
The film only sparingly adheres to reality so as not to detract from the fantasy. Running out of ammunition never seems to happen. It's hard to imagine three out of four of the crew, capable as they are at times, faring any better than millions of other people, much less the US Army. But speculation about that hardly seems the point of the film. The final quarter is nothing if not constant visceral fun.
This is Xbox 360 game Dead Rising come to life, which I found myself reminded of, a banjo, garden sheers, baseball bats, chainsaws...What better weapons for Zombies.

''The first girl I let into my life and she tries to eat me.''

If I have some minor issues, apart from the infinite ammo, it's this: The casting of the film seems extremely calculated. We have a kid that looks and acts like Michael Cera, the hot girl from Superbad, the cute kid from Little Miss Sunshine, and Woody Harrelson to lead the bunch of newbies. If there weren't zombie nudity, blood, and cursing here I'd say it's practically a family friendly comedy caper. I've become a little less of a fan of comedy relying on pop culture over the years because it relies on an audience's knowledge of other films, not the film standing on it's own feet. But I don't want to flog an undead horse too harshly, especially such an entertaining one. I'd gladly watch Zombieland many times, and it remains one of the best zombie comedies out there, which doesn't rely on originality but on successful formulas done by predecessors. I mean if it's not broken why change it? We even have Bill Murray and a Ghostbuster reference thrown into the mix. ZombieLand is a fine tribute to horror and comedy combined. We even have a list of rules to survive from the main guy, now that is clever, not to mention fun.