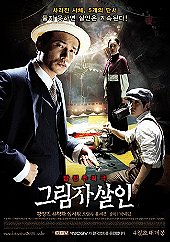 Jeong-min Hwang is Jin-Ho Hong, an ex-police officer making ends meet in Seoul by finding missing persons and cheating spouses. He is approached by a medical student, Gwang Su (Ryu Deok-Hwan), who has a problem decomposing in his basement lab; the body of the son of a high ranking official that he found in a field and retrieved to study. They team up to find the murderer and open a can of worms that threatens to overwhelm them.

There's a touch of Bond and a dash of hard-boiled detective, but not noir, more like CHINA TOWN. Also, a dollop of Sherlock Holmes in the relationship between Jin-Ho Hong and Gwang Su; if you're a Holmes buff you'll appreciate the ending. The murder is, of course, just the tip of the iceberg. The period setting is a change of pace from contemporary Korean suspense/thrillers like THE CHASER with period details looking pretty good, but I'm no expert, so I couldn't say just how authentic. It looked like the mid/late Twenties or early Thirties. There's some action, but this is primarily mystery/suspense book-ended with a good chase (rickshaw!) near the beginning and a nice fight near the end.