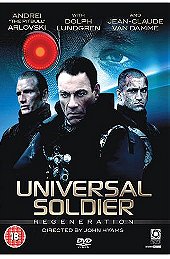 Freedom fighter/terrorists take the Russian president's two kids hostage and also threaten a nuclear disaster (they're holed up in Chernobyl). The ace in their hole is a NGU (Next Generation Universal Soldier) controled by a mercenary rogue scientist. The NGU is damn near an OMAC (One Man Army Corp). Russia/US respond by pulling the first generation Universal Soldiers out of deep freeze.

It's a franchise reboot. John Hyams is Peter Hyams (TIME COP) son. Peter was the director of photography (according to John) or cinematographer (according to IMDB) and the movie looks great. They mostly shot at Sophia, Bulgaria, at an abaondened steel factory which doubles for Chernobyl. John Hyams choreographed the fights which are plentiful and brutal, particularly one rematch. Also interesting is that a Universal Soldier can be the monster and the hero and the villain all in one movie. The characters are more or less one dimensional and there's nothing particularly original in there, but if Universal Soldier: A New Beginning were a cake and you like cake, it's good cake.