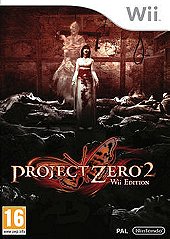 For some reason, Nintendo of America, in all its corporate wisdom, is under the impression that games like Project Zero 2: Wii Edition are not worth localizing to the United States but awful games like Calling are. What do you say to that? What can you say to that really but "Thanks, Nintendo. Thanks for telling me what I want to play. Cuz that would be more fucking Mario basketball and first person shooters. What the fuck was I thinking, wanting to play a remake of one of the greatest survival horror games ever made? What's that? Go fuck myself you say? Okay, I'll get right on that." That's what you say.

At least on the bright side this latest Project Zero (or "Fatal Frame" as it's called here in the U.S.) reached English-speaking gamers somewhere in the world. As we Fatal Frame fans know, Mask of the Lunar Eclipse never officially left the shores of Japan. I say "officially" because enough people raged hard enough that some truly awesome fans, translators, and hackers from Beyond the Camera's Lens put together a completely playable English patch file for the game. Of course, this required U.S. and European Wii users to "mod" their Wii's, which probably makes some corporate tight-ass somewhere in America clench his butt cheeks just a little bit harder, but hey, it's our property; we do whatever we want to it. Long story short: modding the Nintendo Wii is a piece of cake. It's not like the PSP or the PS2 where you have to get into the guts of the system and solder shit on. You don't need a chip and you don't need to buy anything (except a copy of Smash Brothers, which you can just rent) to enable your Wii to play Japanese and European games. I don't want to get into the details here, but you can download all the files you need and step-by-step guides in how to do it.

Anyway, I say all that to say that you will need to mod your Wii to play Project Zero 2: Wii Edition. If you've already done it to play Mask of the Lunar Eclipse, then you should be good to go. As with all these "mods," you will need a legitimate copy of the game, so don't be a gay pirate.

Okay, the remake is stunning. The original game was beautiful enough, but I found certain parts to be too dark. The Wii edition is a bit brighter and draws your attention to lots and lots of little details that have been added. In particular, there were several items in the PS2 version that were in drawers or hidden behind furniture and all you had to do was search the general area to pick them up. That whole aspect is redone in this edition. Now, if there's something for example that is stored in furniture, Mio will go in for a slow peek and open the drawers. This is a really nice touch, but to spice things up every now and then, a spirit called the Ghost Hand will surprise you. Annoying? At times, yes, very. But I can kind of see why Ghost Hand was added. Without it, the sequences of reaching into kimono boxes or behind partitions or peeking down dark wells would lack intensity. There's always a chance that a ghost other than Ghost Hand is waiting for you, too. So on this matter, the remake gets a big thumbs up.

Straight up, though, the Wii version is way easier than the PS2 version. Maybe it's because I've played FF2 several times and games tend to get a little easier each time, but it just seemed like a breeze. Certain "boss" fights, notably the twins in the Doll Room of Kiryu were way easier than I remember. Overall, though, I think the drop in difficulty, if not entirely in my head, is a good thing. You will also find shards of spirit stones now, strewn everywhere throughout the houses. Blue ones will give you 1000-2000 points whereas red ones give you something like 15000-20000 points for the Camera Obscura. These are sort of like "Here, we feel sorry for you. Have some points." Nice, but it makes the game feel easier than I remember it being.

As far as controls, that's one area of the remake I will bitch about. On one hand, the Wiimote seems like the perfect controller for a Fatal Frame game, and maybe it would be, but the two Wii Fatal Frame games control less than great. This one is definitely better than Mask of the Lunar Eclipse, but you will probably find yourself cursing the screen when the viewfinder drifts ever so slightly (on its own, by the way) away from a perfectly framed Blue Ghost. I have no idea why they thought that would be a good idea. The Wiimote pointer is used to move the camera up and down (except it also drifts side to side when you don't want it to) and the stick turns you left/right. To strafe, you have to hold C and use the stick (a very unnatural button combo). To use spirit powerups you have to be locked on (holding Z) and then press C or the down. Down is much more natural. There is no quick turn in camera mode like in the PS2 probably because there just aren't enough damn buttons on the Wii. This makes a few fights (like all the kid ghost fights and any vanishing ghost) obnoxiously more difficult than before. I think this is as good as Fatal Frame controls will ever get on the Wii, though.

On a final note, I will say this. Mio and Mayu were little girls on the PS2. But on the Wii, they are young women. There are lots of not-so-subtle fanservice moments that will make you scratch your head and say "Hmm, I don't remember Mio having tits." It sort of reminds me of Robin Hood: Men in Tights. "Oh, sir, you're back from the war and you've lost your arms...but you've grown some nice boobies."