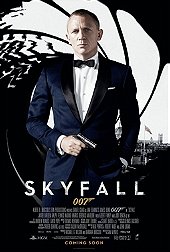 "Three months ago, you lost the drive containing the identity of every agent embedded in terrorist organizations across the globe."

In the case of Daniel Craig's James Bond adventures, third time really is a charm. After 2006's Casino Royale and the dismal misfire that was Quantum of Solace, the producers behind the 007 franchise have finally got it right for 2012's Skyfall. This is a sensational return to form for the long-running series, an extremely satisfying Bond-buster which reincorporates traditional James Bond attributes while updating the character for the 21st Century. Skyfall is the movie that the Craig reboot has been building to since the beginning, at last developing a new identity for the series that mixes the old and the new in an agreeable fashion. Directed by the Oscar-winning Sam Mendes, the picture is rousing fun as well; it's visually gorgeous, exciting, and has a great story. Added to this, Skyfall is surprisingly deep and thoughtful. 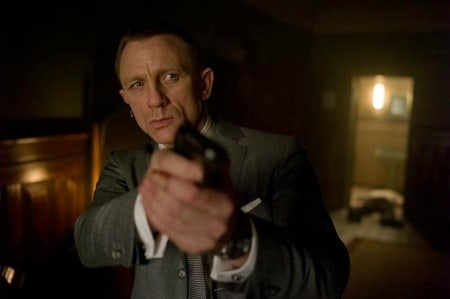 During a crucial mission to retrieve a top secret hard-drive containing the identities of undercover MI6 agents posted around the world, James Bond (Craig) is accidentally shot by fellow agent Eve (Harris) and believed to be dead. Taking his "death" as a golden opportunity to cleanly escape Her Majesty's Secret Service, 007 retreats to a corner of the world to drink and womanise. However, in London, the mastermind behind the hard-drive theft bombs MI6 and begins releasing the identities of the undercover British agents. Head of MI6, M (Dench), is held accountable for the attacks, and the Ministry of Defence begins questioning M's competence. Learning of the bombing, Bond returns to London to investigate, eventually learning of a demented madman named Raoul Silva (Bardem), a former MI6 agent disillusioned by the secret service who has positioned M as his next target.

Skyfall welcomely reintroduces a number of iconic 'Film Bond' staples, dusting off elements like a secret lair on a deserted island and a colourful, megalomaniacal villain. Furthermore, the script (by John Logan, Neal Purvis and Robert Wade) contains a number of light-hearted quips and moments to lighten the mood, shaking off the dour self-seriousness that plagued Craig's first two outings. A new Q (played by Ben Whishaw) is introduced as well, and the scenes between Bond and Q sparkle with the same type of wit we saw during the Desmond Llewelyn era. Thankfully, reliance on old tropes does not make the material feel stale or reheated. On the contrary, Skyfall feels astonishingly fresh. Additionally, the script is filled with witty, well-written dialogue. There are even a number of sly references to prior Bond films through dialogue and situations which will definitely be appreciated by long-time series fans. 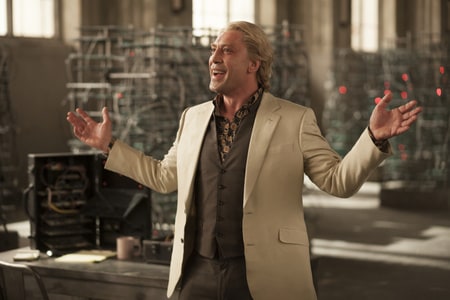 Out of Craig's three Bond pictures so far, Casino Royale is the most story-driven while Quantum of Solace is the most action-oriented. Skyfall, meanwhile, is a pitch-perfect amalgam of the two. Action scenes do not dominate Skyfall: the action is in the service of the story, not the other way around. The film clocks in at a pretty sizeable 140 minutes, and the pace does admittedly lag from time to time around the midsection, but the film is otherwise compelling and engaging. Skyfall is especially notable for the way it probes Bond's psyche and history, allowing us to understand him as more than just a caricature of our imaginations. This is a story about revenge and betrayal, and it unexpectedly brings to the fore a key Bond girl: M. It's not that the two are lovers or anything, but M acts as a kind of surrogate mother to Bond, and it's a crucial relationship which gives the film an unexpected amount of heart.

Fortunately, Skyfall nails another requisite of any good Bond flick: the opening titles. The visuals are old-fashioned yet the atmosphere is contemporary, generating a stunning display of images that suit the franchise to the ground. Adele's classy Skyfall song accompanies the titles, and her tone is spot-on. Skyfall also knocks its opening action sequence out of the park. Beginning in Istanbul, we follow Bond as he chases goons on foot, on a motorcycle and on top of a train, where he uses a freaking tractor to defend himself. It's a nail-biting tour de force of an action set-piece, destined to go down as one of the best beginnings in the series. Sam Mendes was a superlative choice to fill the director's chair, lending his Oscar-winning skills to the franchise that was in dire need of such a deft touch. Especially skilful is his ability to build tension and generate an aura of danger - this is not a "safe" 007 outing, but rather a daring film in which we feel that nobody is safe. The beautiful stylishness of the film is very much appreciated, as Mendes and master cinematography Roger Deakins (No Country for Old Men, True Grit, Revolutionary Road) photograph the frenetic mayhem sensibly, giving us the chance to marvel at the outstanding stunts and remarkable special effects. This is easily the best-looking Bond adventure in decades, and the action sequences are some of the best that the series has ever featured. However, the final showdown between Bond and Silva is a bit limp - with so much build-up, Skyfall should have delivered a show-stopping final fight between the two, but the moment never arrives.

Daniel Craig has finally come into his own as Agent 007. His performance here is more nuanced and agreeable, with hints of humanity and a sense of humour that we have not previously seen. It's not that Craig is a softer James Bond here; rather, it's that his stoic intensity is supplemented by a palpable willingness to actually have fun in the role and drop one-liners with glee. In other words, it announces the end of Bond's coming-of-age which began with Casino Royale. So far, Craig's Bond pictures has been let down by weak bad guys, but Javier Bardem is every bit Craig's equal here. Bardem, who won an Oscar for playing the vicious villain in No Country for Old Men, clearly had a great time playing Silva; he's creepily charming and at times even playful, yet he's also terrifying. Judi Dench, meanwhile, gives her role of M much more depth than ever before, and the seasoned actress has done so with consummate skill. Ralph Fiennes is also introduced as the new chairman of the Intelligence and Security Committee. Fiennes is excellent in anything, and this is no exception. Rounding out the cast is Ben Whishaw as the new Q. Whishaw has plenty of charisma and seems right at home as the tech-savvy Quartermaster. I have no problem with the idea of Whishaw entering the franchise for the long haul.

The biggest success of Skyfall is that it's a modern James Bond film which understands that times have changed since the 1960s, and it adapts to those changes, yet it also has its feet in the tradition of 007 and retains the franchise's spirit. In the final act, we get a brilliant epiphany moment: Bond stands on a London rooftop observing the Union Jack fluttering in the wind. It sublimely underscores what Bond has done for king and country, and promises that he is not finished. Skyfall also works to return the characters to "classic" form within the new contemporary aesthetic, and it's a tempting offer, especially if filmmakers like Mendes are in charge. This is the movie that Casino Royale should have been, and it helps us to forget that Quantum of Solace ever existed.