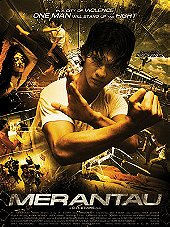 A Merantau is like a Indonesian 'walkabout'. A young man must leave his family for a about a year as a rite of passage to adulthood. Our hero Yula journeys to Jakarta where he hopes to teach Silat, the martial art he practices, but things don't go as planned and he ends up fighting for the lives of a young woman and her younger brother.

This is the international cut of the film which cut about 45 minutes of Indonesian family drama from the movie (the front of the movie). I think this is a really good flick; right up there with Ong Bak/Chocolate as far as the fighting's concerned, but it's got a better more grounded story (with only one glaring coincidence) that goes a few places you don't expect. There's also a low level villain who's a total loser weasel; a great character. The fights are inventive, gritty and often look painful. Always nice to see a new martial arts movie, especially a good one.