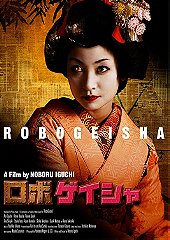 If you've got a taste for gonzo Japanese film making, Robogeisha hits the spot nicely. It's a really fun movie, that's a couple of notches above Noboru Iguchi's previous effort Tokyo Gore Police. This movie has a larger budget (still microsopic for all practical purposes) and like his other movies was shot in two weeks. There's much less blood than his other efforts (he talked about the producer (distrubitors?) not wanting too much blood; this is quite a bit more mainstream (relatively speaking). The tone of the movie is much lighter too. Kinda like a Dr Goldfoot movie, only better. That said, the humor is broad and we were mugged by a few performances, but it was also obvious that everyone on screen was having a blast and their enthusiasm was infectious. The effects are a little slicker; there's a nice giant robot. Take it as a modern equivalent of a Corman quickie.