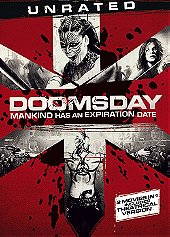 Scotland is completely quarantined after a rapacious virus starts mowing down the Scottish population. Thirty years later a small group of commandos returns to the walled off death zone to look for a cure...

This one's a little tricky. It's really a B movie with an A movie budget, but make no mistake it's definitely an exploitation movie no matter how polished the picture on the screen looks. All the actors were fine (given the material), the action was great and there was a ton of blood and gore, but the script is just shoddy. It's always good to see Bob Hoskins and hey! haven't seen you in a while, Alexander Siddig (Dr. Bashir from DS9). Rhona Mitra is a perfectly good addition to the ranks of women action stars, though she's only made one other action movie since Doomsday, Underworld: Rise of the Lycans (2009).

I don't mind picking out references/homages/lifts from other movies and also, it's not something that the movie gives you enough time to think about while your watching it, but afterwards, the more you think about it, the more you pick the plot to pieces. This is an example of the individual parts of the movie being greater than the sum of those parts. Not a good thing. Even so, its worth watching if you're expectations are set properly.