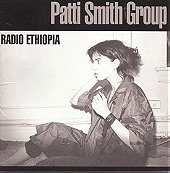 Not even the great and wonderful Patti Smith is immune from the sophomore slump. Radio Ethiopia is great in pieces but lacking as a whole – too many half-formed ideas and not enough of the song quality that made Horses so classic. It keeps the ambitious song lengths and rambling poetic nature of the songs, but forgets to give them a structure to be built on. This may have been her intent, but it makes for a difficult listen.

The straight headed punk rockers like “Ask the Angels” and “Pumping (My Heart)” are fantastic. Smith’s ferocious delivery and guitar wails show you why she’s the grand dame of punk. The hyper-literate and religious minded lyrics tell you why she’s the poet laureate. But it’s once we venture out into songs like “Radio Ethiopia” and “Distant Fingers” that things start to get murky and difficult, even for me. I love a good noise rock song, I even like “Radio Ethiopia,” but at times, the record gets way too pretentious and insular. It’s hard not to blame her for wanting to do something darker after Horses, deservedly, caused every rock critic to fire their loads and proclaim her the greatest thing to happen in American music since Dylan.

I keep practically the whole album on my computer, I’ve even given it a few listens the whole way through. I respect her artistry and intent, but I don’t quite like the whole. Still, it’s better than Wave and Dream of Life, which were just too polished and bland. I prefer Patti Smith being pretentious and batshit crazy while noise rock blasts behind her Beat poet-like rantings. She’s more exciting that way, and it’s why I fell in love with her in the first place. DOWNLOAD: “Ask the Angels”