This brilliant film is a goddamn miracle! 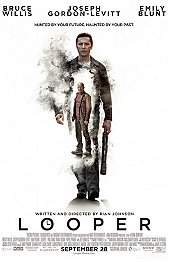 "Time travel has not yet been invented. But thirty years from now, it will have been."

Following in the footsteps of Source Code and The Adjustment Bureau, 2012's Looper is a science fiction film with welcome intelligence and originality, more concerned with conceptual innovation and clean storytelling than CGI or action overload. With Rian Johnson (Brick) behind the film, this is exactly the type of sci-fi production we always hope for, but have learned to stop expecting after so many years of soulless sci-fi drivel. In short, Looper is a masterpiece; a popcorn film with brains, an indie sensibility, a top-tier cast, and some great action set-pieces. Released in the same year that begat the abominable Total Recall remake, this powerfully brilliant production is a goddamn miracle. 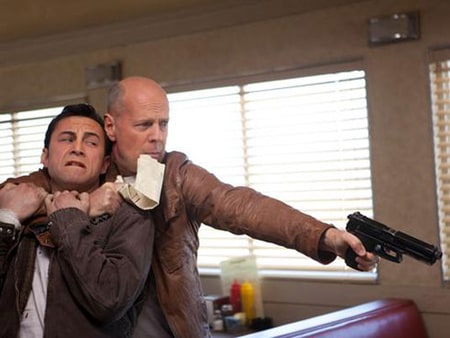 In the year 2074, time travel is possible but illegal. It is only used in secret by high-powered criminal organisations looking to dispose of corpses by sending them back to the year 2044. Joe (Joseph Gordon-Levitt) works as a "Looper," a criminal assassin paid to eliminate the targets who are sent back in time to be disposed of. For his latest job, though, Joe finds that his target is his older self. As it turns out, in the future a crime boss known as The Rainmaker is killing all the Loopers. Old Joe (Bruce Willis) evades assassination and goes on the run while Young Joe sets out to finish his mission while being hunted by his colleagues. The Joe of the future has one thing on his mind: finding and killing the man who will go on to become The Rainmaker and be responsible for the death of his beloved wife. Finding out that one of the possibilities on Joe's hit-list is a young boy on a remote farm, young Joe heads to the house hoping to find and confront his older self. However, he ends up befriending farm owner Sara (Emily Blunt) and her son Cid (Pierce Gagnon).

Perhaps the most masterful thing about Rian Johnson's screenplay is that it's genuinely difficult to determine who's doing the right thing. Thanks to well-judged character development, we feel Old Joe's pain over the death of his wife, and we completely understand his desire to prevent her death by eliminating The Rainmaker...even though the future mob boss is still a child in 2044. Likewise, Young Joe's need to finish his mission is understandable, and, due to his growing bond with Sara and Cid, it's easy to understand his want to protect the mother and her son. Johnson is a terrific storyteller, peeling back the narrative in a nonchalant yet sophisticated fashion. In order to keep us up to speed with the ins and outs of this peculiar future world, Joe delivers occasional voiceovers. Narration is often a lazy device employed to disguise an inherently weak screenplay, but Johnson uses Joe's voiceovers smartly and efficiently, tersely keeping us informed without grinding the pace to a halt. However, once the film shifts to Sara's farm, Looper does hit a few sluggish patches. The picture is never necessarily boring, but it could have been tighter. Frankly, this is the only criticism I have with Looper. 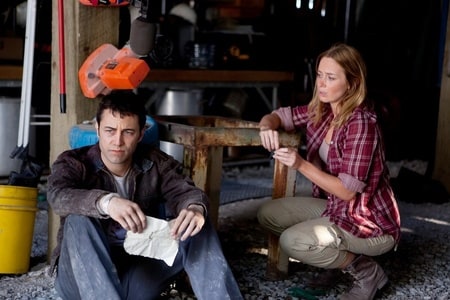 Johnson was working on a scant $30 million budget, which forbade him from creating a garish, CGI-laden future world like Minority Report or The Fifth Element. And this is actually for the best - Johnson instead provides a scarily plausible vision of the future that's distinctive but not over-the-top. Techno advances are used sparingly, and the futuristic production design and fashion is unobtrusive, yet you won't mistake this for a film set in 2012. Sure, cool hover bikes exist, but only the rich can afford them; everyone else tools around in old-fashioned cars. This is a bleak future America suffering from economic and sociopolitical woes, where homeless litter the streets and police officers are few and far between. There are digital effects in Looper, though, and they look extraordinary, bestowing the film with an polished look which belies its low budget. Johnson's directing is extremely stylish and grounded throughout, yet he doesn't embrace the joyless "gritty and dark" approach which has become so widespread in this day and age. His handling of the action scenes is excellent, as well. The action comes in short bursts and each scene is thrilling, earning the film its R-rating. Also strong is Nathan Johnson's score, a mix of exciting and haunting music which amplifies the film's sense of atmosphere.

Bruce Willis and Joseph Gordon-Levitt are both spot-on in the role of Joe, doing a remarkable job of inhabiting the character at different periods in his life. Gordon-Levitt has done a marvellous job of replicating Willis' mannerisms while also delivering an engaging performance. Willis has more of a supporting role, but he absolutely shines. The actor has been stuck in meaningless pay-cheque roles for over a decade, only very rarely showing his true acting chops. Willis cut loose in The Expendables and its sequel, but Looper displays Willis as the serious, Oscar-worthy thespian for the first time since The Sixth Sense, blending toughness and tenderness in a remarkable fashion. The biggest stand-out, though, is Pierce Gagnon as Cid. Gagnon is still a child, yet the command of the character exhibited by this tiny performer is terrifying. Meanwhile, Jeff Daniels is wonderfully sinister and colourful as Joe's gruff boss, making you hope that this will be a career resurgence for him, and Paul Dano and Garret Dillahunt show up in small but memorable roles as a couple of Joe's co-workers. 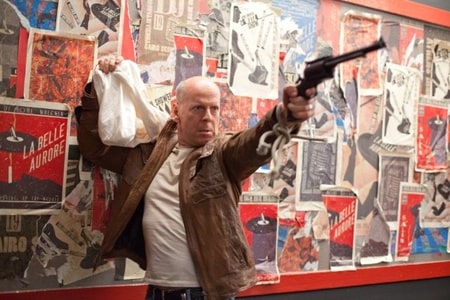 There's a lot happening throughout Looper's narrative, and the script was in danger of collapsing under the weight of all the twists and complications, but Johnson has concocted an ending you won't see coming that wraps everything up in a proper fashion. Science enthusiasts will probably want to argue the logic of the film's time travelling mechanics, but that's about as useful as debating unicorn lore. Time travelling is fantasy so all that matters is internal consistency, and Looper never breaks its own rules. There's little left to say about this movie except that you should stop reading this and go watch it. Pronto.