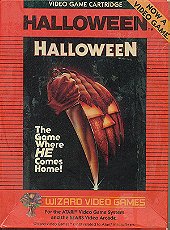 Throughout the history of video games, one stereotype seems to remain constant; if it’s a game based off of a movie, then it probably won’t be all that good. This trend started way back on the Atari 2600 with various movies like Porky’s, Raiders of the Lost Ark, and, of course, E.T. being turned into painful-to-play games. Then there’s Halloween, which isn’t quite as confusing as Porky’s, frustrating as Raiders of the Lost Ark, or broken as E.T....In fact, it’s actually a fairly competent game.

The premise of Halloween is simple: Save children by guiding them to safe rooms on two floors before Michael Myers is able to kill them or you. Repeat this step and rack up points. That’s it. Occasionally, you’ll find yourself with a knife that you can stab Michael with to make him run away and score some extra points...However, it takes some practice to time the attack right. Without good timing, there’s a decent chance that Mr. Myers will decapitate you while you attempt to stab him.

That’s right. Halloween is a game on the Atari 2600 that not only contains blood, but decapitation of the character you control. After Michael Myers murders you, your head is gone and you get to watch an animation of your character running across the screen, sans head, with squirts of blood flowing from the neck. It’s comical and tame by today’s standards, but I’m sure that back then this kind of stuff was pretty wild and crazy to see within a game.

Aside from the comical gore, Halloween attempts to obtain some atmosphere by having certain rooms in the house with flickering lights, making it difficult to see Michael Myers as he marches toward you with his trusty knife. The rooms flash completely black at points and then flash back for a brief moment to let you know that Michael is coming for you before flashing black again, leaving you to kind of make a guess as to how to dodge the knife-wielding killer. While this is a kind of neat concept that can actually make the game feel a tad more suspenseful, there’s one flaw with it: You never need to enter those rooms. You’re free to go back the way you came, head up or down to the next level of the house and completely avoid it as you continue to save the kiddies.

Graphically, this is your basic Atari 2600 fare. There isn’t much detail, but enough is there to let you know what’s going on. The change of colors on the walls of each room is also a nice touch to help prevent a feeling of visual repetitiveness. As far as audio goes, there’s only one song, and that’s the theme to Halloween...And for an Atari 2600 game, it’s not absolutely terrible. It actually sounds like the theme and not a bunch of noise that only somewhat resembles it. It’s some pretty nice audio considering the software and hardware that it’s being played on.

When it’s all said and done, what you’ve got is a video game based off a movie that, while not an excellent title, is a passable one. This is a decent game to pull out and play every now and then for the lame cheesiness of the deaths. The biggest downside to this game is that it’s way too easy, so you’ll likely get bored of successfully dodging Michael Myers over and over again. The ability to grab a knife and fight back is neat...But it’s not enough to make this game feel truly great. As it is, it’s still worth your time if you ever get the chance to play it. But I can’t help but think that it could have been better with just a few more ideas thrown in.