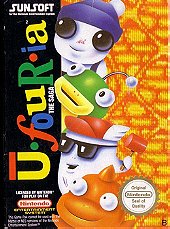 Probably my all-time favorite game in NES. Even better than Super Mario bros 3 or Legend of Zelda, and that is a lot.
World was wide and beautiful, and it opens little by little when you advance and get new items. Enemies were... weird. Like lips and tongue crawling on the ground and licking. Or birds dropping heavy weights. Then there's these jumping beans? I think those same beans appeared in [Link removed - login to see].
Bosses were even stranger. And graphics were really pretty for a NES game!

If I had find something negative about the game, it would be the password system: 5x6 grid that you fill with three different colours of dots. But hey, passwords always sucked back then, and it was luxury to even have a password system in a game. It took us hours to beat Ufouria on one stand.

So yeah. Definetely one of the best NES-games.