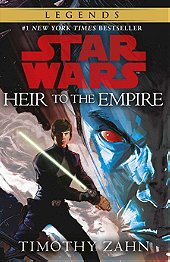 Based around the characters from and drawing heavily on imagery from the original Star Wars Trilogy (Episodes 4/5/6), is quite possibly what helped make these books so successful. I have noticed that the characters are often placed in similar situations to those faced in the movies, but with sufficiently different circumstances to make it easy to visualise and yet still a great read at the same time.

The original characters are developed well, with Luke struggling to find his way as the last Jedi in the universe and Han & Leia trying to protect their unborn twins from repeated kidnap attempts. All the other characters we love are all there and Lando is brought in early on and gets tangled up in it with them.

Of the new characters, Mara Jade keeps you wondering with a mysterious past, some limited ability to use the force and deep hatred for Luke. Also the insane Jedi Master, who is obsessed with making Luke his apprentice and taking the unborn twins from Leia, tests Luke to the limits.

However what really made this story excellent for me was the addition of Thrawn, the awe-inspiring Grand Admiral who has taken hold of the Imperial Fleet and begins running rings around the fledgling New Republic with his military genius. While at the same time you know he is the bad guy, I could not help but find myself rooting for him half the time!

If you let yourself get immersed in it and try to ignore one or two minor inconsistencies and perhaps the over-reliance on situations from the films, it feels like the perfect continuation. Quite frankly I am not sure anyone could have done better even Lukas himself.