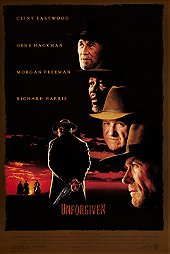 This is a story of surviving your present with haunted memories of one's past.

Will Munny was a whimsical murderer and an assassin. He was a cold hearted drunk killer who even killed children and women at one time. His life took a u-turn when Cluadia entered his life. They both got married despite of Claudia's mother objection when she feared her daughter was going to be killed by him and thus Claudia was making a big mistake.
They got married and Cluadia straightened him up. He stopped drinking and gave up his ways of killings. They got 2 children and then Claudia died due to small pox.

He remained faithful to his wife but his faith and love got tested when he had to go back and do a final kill to earn some money for his children. Will he be able to do it?

First of all, I would love to discuss the fact that the character depiction of will Munny is great. When he rides the horse for the first time in years, you actually feel like he is doing that after years because here is what I always think is weird in movies.
We humans when we do exercise and then leave it for months or years our stamina grows weaker but in Chinese movies and in countless Hollywood movies, when a hero returns from exile esp action one, they are still perfect. I get it, they were kung fu masters in youth but after some years without their exercise, will they still be having that much stamina? Frankly I felt quite frustrated at that fact so unforgiven thanks for that portrayal.

Story is good, musical score is nice. Acting is great and over all the feel of the move is very natural. You can see Sergio Leone's impact on Cint in many shots esp in terms of cinematography. Last bar scene was quite fitting and I saw myself rooting for Will.

So should you watch it:
If you like watching a move with drama, emotions and not so warped screenplay then it is the movie. I won't recommend it for watching with your friends though because it is quite slow paced for that.