You Can Learn Japanese From a Video Game?! 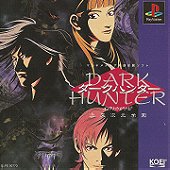 異次元 (ijigen) literally means "other dimension" which refers to the homeworld of the "creatures" in the game. The academy is called Jigen Academy, a sort of double entende. The translations of the titles above aren't official.

Dark Hunter is a two-part interactive anime series released by KOEI in April and May of 1997 for the PSone. Part One ("Otherworld Academy") and Part Two ("Demon Forest") together make up the Dark Hunter story. It's important to know you'd need to play them back to back because neither game makes any sense by itself. Part One literally ends with a To Be Continued screen. Publishing the games separately was an interesting choice given the close release dates, although I scratch my head wondering why Dark Hunter wasn't just a 2-disc release.

Dark Hunter is the second series in a KOEI project called the "English Dream" series (英語体験) aimed at giving Japanese students firsthand experience with the English language. (For more: http://koei.wikia.com/wiki/Dark_Hunter) What this means for you is that you can play this game from beginning to end in English.

Above each game's title on the box art you can see the words "English Multimedia Software." And you can expect short quizzes to pop up from time to time testing your English listening/reading (hence "multimedia"). The prompts are given in Japanese, but the quizzes themselves will pose no challenge and they do not penalize you. 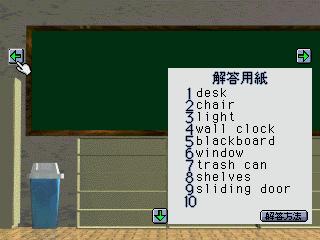 All of the other dialog boxes in the game can be viewed in English or Japanese. You can really play this game without knowing a lick of Japanese. Well, there is one part where you need to know the words for "left," "right" and "behind," which are "hidari," "migi," and "ushiro," respectively. So, I guess you need to know just a lick.

As mentioned, both "Otherworld Academy" and "Demon Forest" can be played in English or Japanese with optional subtitles for either language available. The tracks can be changed during any scene, but the English subtitle track comes with the added bonus of a built-in dictionary. This means that you can play Dark Hunter in the original Japanese by way of very polished, professional English subtitles. Not only that, but you can also pause the dialog at any point to look up the Japanese definition of highlighted words or phrases in a subtitle. If you are so inclined, you can even switch over to Japanese subtitles to test your Japanese listening or transcription. It turns out that this game is an excellent Japanese learning tool for English speakers as well. 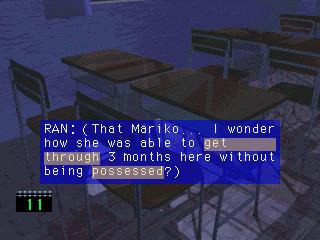 I will point out that the Japanese voice acting is vastly superior to the English. I recommend playing the game in Japanese with English subs. If at any point you wish to re-listen to a snippet of dialog, push the X button. From the menu that opens, you can "rewind" scenes with L1, look up words, change the language settings, and switch between the three playable characters: Ran, Mariko and Cher.

The few interactive scenes of Dark Hunter involve clicking the cursor over a moving target or avoiding pursuers in a first-person 3D mode. This mode is sort of a problem in the minigame bossfights, because you can't use the analog sticks. And positioning a slow cursor over a quickly moving target using the D-PAD is a pain in the ass. Some of the fights require nothing short of ninja reflexes to win. There is some degree of predictability in where the next target is, so you can sort of get the cursor ready, but it's still a challenge. Not impossible, but kind of annoying at times. 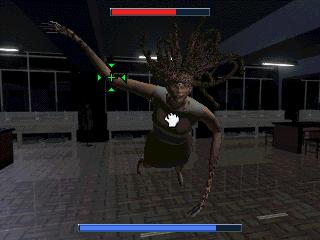 The non-bossfight interactive parts are like what you'd expect in a point-and-click. You generally know what you need to do, but occasionally you will have to re-check the same clickpoints a few times to trigger the next thing in the game. There's no inventory. There are no puzzles. You're just clicking on stuff and watching clip after clip.

There is a noticeable lag between the clips due to loading. This lag is probably the result of the game loading not only a video scene but multiple voice and subtitle tracks. Because of this, the clips (which make up most of the game) are a bit choppy although not unwatchable. The audio, on the other hand, is smooth.

The game's story is genuinely entertaining (not unlike the stories involving a possessed faculty in the Obscure series). I give an introduction to the plot below. Dark Hunter is essentially an anime in video game's clothing. What really appealed to me about this game, though, was the concept of subtitles you can learn from. I'd love for more games to explore this idea.


Plot Hook:
The story of Dark Hunter takes place atop the heavily wooded Mount Chigusa in a school for delinquent students called Jigen Academy. Shrouded in the unnatural shadows of Kubigamori Forest, the Academy overlooks a town called Kimen. In the game's opening scene, the main character, Ran, muses over the irony of the town's name, which is written in charaters that mean "face to the demon." Ran is obsessed with entering Jigen Academy in order to take revenge on those who destroyed his childhood, interdimensional plant- and insect-like parasites called simply "the creatures" (怪物). Ran has spent the last seven years of his life preparing for a showdown with the leader of these kaibutsu, the one most responsible for his family's death, Shogen Kuji, who is the dean of the academy. 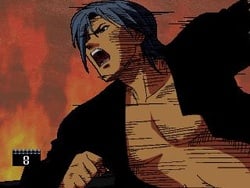 Several years ago, Ran's mother, a powerful psychic, volunteered her life in a secret project to make the X Antibody, a protective antidote against the creatures. It was only a few years after her death that Shogen Kuji and his minions killed Ran's father and elder brother. Protected by the crystal shard left to him by his mother, Ran alone escapes the carnage swearing an oath of vengeance on Shogen Kuji's life. Ran possesses the ability to read people's mind, a gift he inherited from his mother, and right away sees that Mariko is the only student at Jigen Academy who has not been possessed by the parasites. 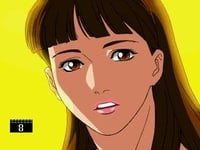 Mariko also lost her mother at an early age and began suffering from hallucinations. Her step-mother decided that Jigen Academy would be the best place for Mariko and sent her there during her sophomore year in high school. But were her intentions really in Mariko's best interest? Since she got to Jigen Academy, Mariko's visions have stopped, but, for reasons unknown, the creatures have left her untouched. 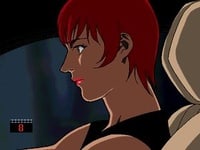 Cher is the third playable character. She is a CIA agent sent to Jigen Academy to investigate the whereabouts of Charles Kuroda, also of the CIA. Charles is Cher's fiancé, but he has mysteriously failed in his mission to destroy Jigen Academy, Shogen Kuji and the creatures from another dimension. Cher has been sent in to clean up the mess in that rootin-tootin' way only an American can.