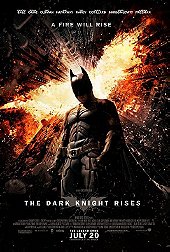 I re-watched the first two movies before going to see this one today, and I was not disappointed in the least - except for one thing. One detail that was a big disappointment and totally frustrating - trying to make out what Bane was saying more than half the time he was speaking, was really very difficult. He was muffled and unless he was speaking very loudly, or really clearly, a lot of what he said was just lost.

You would think with such a big budget production, they could have done something about this problem, because I am not the only one who had this complaint. I saw it with a friend who had already seen it once, and he said that, on the second viewing, he was able to make out more of what Bane was saying than the first time he went, but it was still quite a challenge.

Other than that, and the fact that I found everything in the film totally predictable (which, either it was completely predictable, or I have just simply seen way too many movies to actually be surprised most of the time I see new movies anymore), I loved it. Great action sequences, good story, great performances from the cast. Just great, but that one detail I already mentioned just really ticked me off. It was so bad that sometimes, you wished Bane had subtitles so you would know what he was saying.