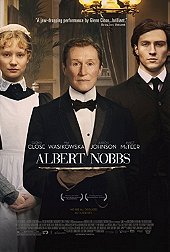 Albert Nobbs is a woman, dressed as man who serves as a butler, known for being meticulous, alert and mannered. Albert meets another woman (Hubert Page) dressed as a man who is serving as a painter and his little life changes.

In the first half of the movie I was generally happy since Glenn's performance was great. She knows how to capture audience and story progresses at a good pace. We get to know all the cast and I liked this whole intro better than "remains of the day" movie where we had similar situations (though Anthony was really a man) and that movie was quite boring and uptight. (Note: Both movies are very different from each other).

But then when we get to the middle of the movie Everything instead of going up went downhill. The performances are great but I couldnt get my head around certain things and those just kept bugging me.

That all started when Albert visits Hubert Page and meets his/her wife Cathleen. They both acted as wife and husband and I kept thinking how is it possible? I mean I was hoping to get the fact acknowledged that Cathleen knows Page is a woman but she doesn't. I then hoped that may be this is a lesbian couple which also didn't get acknowledged so that left me quite confused. Seriously wouldn't Cathleen know Page is a woman? I couldn't wrap my head around it.
And this identity crisis repeats itself again but let's not go into spoilers cause that would be one.

Over all, beautiful performances, very good costumes, cinematography is beautiful but since at one point you can't wrap your head around certain things it all goes downhill for me at least. so 6/10. (would have been 4 but performances were cool)