deserves the respect it recieved 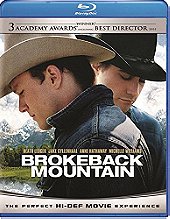 i expected this movie to rank up there somewhere with the kind of movie titanic was. it was hyped much in the same way. but where titanic is unwatchable trite drivel, this movie has a solid core to stand on and does so much more beyond that core. it earns respect instead of buying it with pop fluff.

there were a number of things i expected to hate about the movie. jake gyllenhaal and heath ledger, on the surface of it was seemingly dicaprio and winslet picks for the story. i thought they couldn't possibly pull off anything more than a goofy impression of a cowboy and a rodeo jock. ledger is clearly better at it, but to gyllenhaal's credit he does ok. secondly, i wasn't at all interested in a story about cowboys. thankfully this story is about people who are cowboys. they have much more depth to them than is expected. i also expected since this is essentially a country boy movie that there would be a lot of awful country music. (not a fan sorry) while there is country music, its not overly in your face, and certainly not modern redneck drinkin' man music.

at 2 hours, the movie is a bit languid. especially the first quarter or so where there is very very little dialog at all. i'll say that i was tired when i watched this and it still somehow maintained my interest.

the story as everyone probably knows, is about two cowboys who meet while working in the remote country herding sheep. they fall in love. set in the 60's and on, their love is kept secret while they go on about their lives. they each get married, have kids, and jobs. and then they get together here and there to rekindle their secret love. over the years families are the mess that families can be. relationships sour, in ones case they find they didn't really love each other, in the other the wife finds out about his secret and is both understandably upset by the betrayal and disgusted by his homosexuality (i think bisexuality is probably more appropriate in his case). the ending is unexpected, both for what happens and, in my view, because the movie takes such a surprisingly long view of decades of their relationship.

beautifully film, well acted, the script is a necessary study for film majors, and all together one of the best films ever made. this movie really is about love and relationships. there will be those that hate the homosexuality of this movie, thats expected. if you can't get over that hatred, then this probably won't change you. for everyone else, this is a great movie.

on a down note. gyllenhaal is not entirely convincing as a rodeo jock. and while ledger is better he isn't completely convincing as a cowboy. those are roles that these guys took on and did their best. finding actors that could do convincing cowboys and everything else these roles required is likely impossible. i'm not talking jokingly about cowboys kissing....no, not at all.....these are complex roles that take on many different aspects of life. lesser actors would simply cower away from the demands of such a roll. in fact i think what gyllenhaal and ledger do worse than act as cowboys is act a intimate lovers. together as a relationship they are convincing, together in intimacy they are not. not bad, but not convincing.