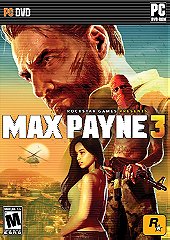 If there were ever a more tragic videogame character than that of hard boiled undercover cop turned vigilante Max Payne, I haven't found them yet. Remedy's 2001 PC exclusive, Max Payne, was something the likes of which we'd never seen before. Culling inspiration from Hong Kong action films, the slow-motion, Bullet Time-infused shootouts of The Matrix, and the dark, foreboding atmosphere of '40s & '50s noir cinema, Remedy created something wholly unique and innovative.

Max Payne and its sequel, Max Payne 2: The Fall of Max Payne never suffered the fate of innumerable rip-offs and imitators, although the series' success certainly inspired other developers to craft more cinematic and story-driven games. If Valve's Half-Life was the precursor to the cinematic action game, then by comparison Max Payne was the speeding locomotive that officially kicked this ever-popular form of shooter into high gear. Brimming with unbridled excess and some of the best shootouts in videogame history, the Max Payne titles are also of note for their excellent voiceacting, characterizations, and dialogue.

After Max Payne 2's concise wrapping up of all loose plot elements from the first title and sealing the fates of nearly every character in the process, it wasn't hard to see why a second sequel was deemed both unneccesary and never expected to materialize. If a Max Payne 3 was to ever happen there were very few places they could take the story. And when screenshots of a bald, heavier, and more grizzled looking Max surfaced in the summer of 2009 - with accompanying reports of Rockstar handling development duties - I and many other fans wondered just what the hell they were doing. Slowly but surely more details started trickling down. The dreary New York setting was ditched in favor of sunny São Paulo, Brazil, Max's trademark leather coat turned in for an ill-fitting tank top, cargo pants, and grubby looking construction boots, and no mention of how this entry would tie into the previous games. Indeed, the future of the Max Payne franchise was looking decidedly grim.

But after three years of waiting, anticipating, and praying, the console versions of Max Payne 3 were released on May 15th with the PC version following on June 1st. After four (yes, four) playthroughs and still saddled with this insatiable need to plow through it again, I can honestly say that Rockstar have delivered a sequel far better than it has any right to be. Despite the totally insane amounts of tonal changes, new characters, and shunning of past trademarks, Max Payne 3 deserves to be played more than any other game in recent memory. Why? Because it knows exactly what it is and really, truly does not give a shit. Although a lot has changed in ten years, there are two constants that were true when the first game debuted and are still true today: Max is the single most unfortunate human being on the face of the planet, and blowing away bad guys in ultra-cool slow-motion never gets old.

James McCaffrey returns to voice Max and Rockstar certainly puts him through his paces. Remedy never allowed Max to show much anger or, more specfically, to show much emotion at all. McCaffrey had always portrayed him as a glum, somber, and reflective man with a penchant for philosophical meanderings and a cool head. The drug-addled, drinking-himself-to-death version of the character in Max Payne 3 is far more vocal, angrier, and prone to fits of violent rage. Max is but a mere shadow of his former self; broken, self-loathing, and completely disillusioned with the world around him. And while the first two games were relatively light on the profanity (and to my recollection, Max never swore), in typical Rockstar fashion there are loads of unrelentingly foul language and Max certainly provides his fair share of it.

The last time we saw Max it seemed he had finally come to terms with his family's murder and would therefore be able to proceed with what was left of his life, picking up the broken pieces as he went along. And this is what separates Max Payne 3 from the previous two entries the most: this is - in very few ways - a direct sequel. There are only two chapters that take place outside of Brazil (New Jersey, to be exact) and they are used to explain how Max winds up in São Paulo. As a bodyguard for a real estate mogul, no less. There are very few mentions of past characters, there are no returning characters, and outside of the Bullet Time mechanic and Max's continual use of inner-monologues, they share considerably fewer similarities than fans would have probably liked.

But outside of creating a game that acts as more of a standalone reboot than a full-fledged sequel, Rockstar have delivered what is easily the best pure action game in a very, very long time. The RAGE graphics engine - which Rockstar debuted in their seminal hit Grand Theft Auto IV - is used to great effect here. The best the engine has ever looked, in fact. The PC version offers up considerably better textures, shadows, lighting, and particle effects than it's console counterpart, not to mention amazing performance optmizations and full DirectX 11 support. But either way you slice it Max Payne 3 is damn good looking regardless of platform. The facial renders look fantastic, the locales are brought to life with an immaculate attention to detail and photorealistic depictions of Brazilian architecture, great looking character models, and a plethora of diverse, highly-destructible environments to shoot the living shit out of. The Bullet Time effects themselves are nothing short of breathtaking.

Further emphasizing Max Payne 3's highly cinematic gameplay are two new features Rockstar designed for that very purpose. If the player has at least one painkiller left (the Max Payne series' answer to medkits) and an enemy depletes their health, time will slow to a crawl and allow you a few seconds to line up a shot and eliminate said enemy. It's an insanely cool aesthetic that keeps the combat flowing smoothly and naturally while also acting as a valuable gameplay tool during moments when the hectic nature of the gun battles won't net you enough time to recover some health. When these moments occur - referred to in-game as Last Man Standing - the player can control the speed of the camera. There are also moments during gameplay where a particularly nasty kill warrants a Bullet Cam (i.e. a tracking shot of the bullet hitting its target) which, again, the player can adjust at their leisure for added cinematic flair.

The RAGE engine has also been optimized to accomodate high levels of destructibility with nary a framerate drop. What's even more notable is the Euphoria physics engine, yet another piece of tech initially developed for GTA IV. It allows for realistic character movement by giving individual models skeletal structure and weight. Euphoria allows for every single character model to run, move, fall, and tumble with eerie authenticity. The Euphoria technology also eliminates those rather unsavory moments from past games where - if Max were to dive in the direction of a wall, for example - the Shoot Dodge animation would continue on as if there were nothing there. With Euphoria, impacting solid objects causes Max's body to take on the characteristics of real-life force and inertia.

On top of truly outstanding gunfights and set pieces, the story being told is both impressively written and unrelentingly grim. More so than the previous games, the violence in Max Payne 3 is swift and unwavering. There are some truly heinous moments of bloodshed that occur throughout and almost always when you least expect them. The shootouts themselves are extremely bloody, almost Sam Peckinpah-like in their gratuity. These gunfights are appropriately accented by amazing sound design and an eclectic, effective soundtrack. The score - consisting of original songs by rock band Health - accentuate the on-screen carnage but are used sparingly so as not to overshadow it. A sequence set in an airport is a perfect example of how Health's score works in tandem with the visuals to heighten these visceral set pieces.

With the main campaign clocking in at 10-12 hours with immense replayability via collectables and unlockables, there are an impressive amount of other game modes as well. Max Payne 3 is a story-driven affair, so it's no surprise that the game's multiplayer mode is serviceable if nothing memorable. Those yearning for an involving, deep multiplayer component won't find much to write home about. Very run-of-the-mill gameplay won't hold the attention spans of online fanatics for long, but the inclusion of the campaign's Bullet Time, as well as unlockables and some interesting modes of play make for a unique diversion.

The New York Minute mode - a popular feature carried over from Max Payne 3's predecessors - is essentially a time trial mode that rewards fast reflexes and quick thinking. The Score Attack mode is self-explanatory, though notable for allowing players to choose from an all-encompassing selection of costumes, two of which re-imagine the Max Payne models from the first two games. It's a great bit of fan service from Rockstar and provides a nice incentive to play through the game again if only to fantasize about what the game would have looked like if Max's prior looks had stuck.

With a lot riding on it and a new set of developers at the helm, Rockstar have not only surpassed my expectations but have a legitimate contender for Game of the Year on their hands. Max Payne 3 offers up a dark, gritty, and unbelievably violent tale of redemption presented in a way that only Rockstar can. Graphically superb, unbelievably fun, and fresh enough to break new ground for the series without sacrificing the quality or relevancy of it's prequels, Max Payne 3 is nearly perfect in every way. And despite a concluding act that doesn't wrap up the story as finely or as appropriately as I'd have liked, you'd be doing yourself a disservice by not recognizing just how seminal this game is and how it nearly perfects it's genre. Rockstar proves yet again why they are awarded such consistent praise. Max Payne 3 is action gaming at it's finest.