Review of Get the Gringo 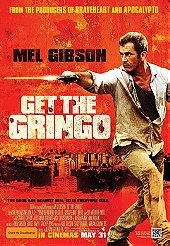 Mel Gibson is at his best when someone is kicking the shit out of him. Payback, Lethal Weapon and conspiracy theory are damn fine examples of Mel's ability to take a kicking and still come out looking cool. So I was more than glad to see him back at his best in 'Get the Gringo'.
Being typecast is not always a bad thing, for some actors it can be a blessing; I want to see Bruce Willis killing a ton of guys before delivering a witty repartee, I want to see Steven Seagal avenging the death of his murdered wife, I even want to see Hugh Grant in a last minute dash to bag the girl, and I want to see Mel Gibson chasing down a big bag of cash stolen from him, shooting every bad guy who gets in his way. If you agree with me, then 'Get the Gringo' is definitely for you.
Mel's private life has been taking a bashing recently and a lot of people had assumed he was finished, this film will change their minds. Sure it's nowhere near as good as the aforementioned movies, but it is a solid action movie with a decent script and filmed in the most bizarre prison I've ever seen. If you like classic Mel Gibson, you will like this film.