Review of The Last Broadcast 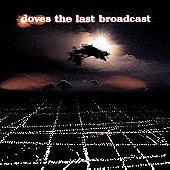 The sophomore effort from Manchester's Doves yielded two of my favorite songs of that year (2002-3?). "There Goes The Fear" builds slowly to dramatic heights, culminating in a rhythm you'd expect in a Brazilian mardi gras. It's tabbed by Nick Hornby in his "Songbook" as one of his favorite songs.

Then there's "Pounding," which is a fine description of itself. The continual pounding drum and more upbeat melody than anything on their debut album has made its way onto numerous compilation CDs I've put together.

Don't think the rest of the album isn't good as well -- it's just rare for me to find two songs on a single album that can make my face tingle when they come on the stereo.