Review of Ninja Gaiden II: The Dark Sword of Chaos 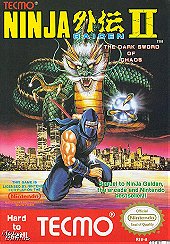 When it comes to video games, I try to be subjective. While I won't shy away from praising a solid title in conversation, I'm usually able to offer up some criticism to go along with the good. Impartial as one thinks they can be, there are some games even I can't help but fawn over. Ninja Gaiden II: The Dark Sword of Chaos is one of those titles.

So what's so special about The Dark Sword of Chaos or Ninja Gaiden in general? As wishy-washy as such an explanation may seem, a lot of Ninja Gaiden's charms have to do with what the games accomplished during their era. The games may have been legendary for their high level of difficulty, but the real reason Ninja Gaiden was able to distinguish itself from the crowd was a novel feature that was dubbed "Tecmo Theater." A form of storytelling that's been incorporated into nearly every game today, "Tecmo Theater" was a primitive take on the quintessential cut scene. As primitive as these "cut scenes" are, they're incredibly powerful in propelling the game's refreshingly adult-oriented narrative forward.

It's this "mature nature" that the Dark Sword of Chaos and the original take to the bank. Characters are stabbed, shot and killed, not just "defeated" like a typical Nintendo game, and the life-and-death struggle that plays out sets a mood that few games (of the time) could match. There is perhaps no greater example of this than the game's opening scene. Point blank, I can't be the only one who gets chills as Asthar scrolls across the screen declaring his allegiance to the forces of evil. It's easily one of the most defining moments I've experienced in a video game and I'm sure I'm not alone.

In regards to gameplay, the most common comparison people make in regards to Ninja Gaiden is old-school Castlevania. The comparison is apt on the most basic level given the game's set-up and look, but is ultimately misleading since Ryu controls a lot differently - and a lot more fluidly - than a typical Belmont. New power-ups like the shadow doubles, coupled with the ability to scale all objects fit seamlessly into the mechanics and give the player an immense edge when employed correctly. Still, some will be at odds with the knock-back received from enemy attacks. The game pulls no punches when it comes to punishing the player for miscalculations, the result usually being the loss of a life. Cruel as it may seem, the test of a good player is using this hitch to your advantage.

The game's remaining elements go long way in forging an unforgettable adventure as well. Sonically, the game’s a tour-de-force that easily matches or surpasses its predecessor, enhancing the action on the screen to an absurd level. One will also find the scrolling/animated backgrounds are a nice upgrade from the static backdrops used in the first game. Simply put, name something and The Dark Sword of Chaos has improved upon it; name something that was fine the first time around and The Dark Sword of Chaos has left it alone.

In the end, games - and sequels - don't get much better than Ninja Gaiden II. Cliche as it sounds, Tecmo created something more than a mere game here; they created an experience. Do yourself a favor and partake of something that transcends an era, something that is greater than its whole.