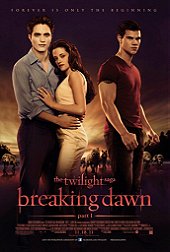 This fourth movie in the series is, I think, the worst of them all by far, as it spends SO much time on the sickeningly gross love story between Edward and Bella. And yet, this was the book I enjoyed the most because it spent a lot of time on Jacob, as well as Bella. So far, in the movie, Jacob is still a smaller character. Most of the movie was just paying tribute to the love of Edward and Bella, and then their eventual tragedy.

I am glad there is only one more in this series, then I never have to be subjected to this crap, or Kristen Stewart's terribly bad acting, ever again.