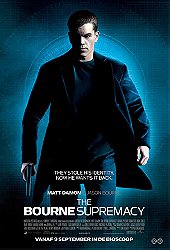 These days, everyone uses (and over-uses) the wildly moving camera angles, and this movie has PLENTY of that (warning to any epileptics out there) but this movie is one of the few that deserve this intense camera work. This movie starts off with a major shock which gets Jason Bourne out of hiding and into revenge mode. It also explores more about Jason's past, and his guilt at what he used to be.

An action movie with a believable plot, instense suspense from beginning to end, awesome car chase scenes, shocking moments, and even a bit of drama near the end when he tries to tackle with his guilt. You can't ask for a more perfect action flick.