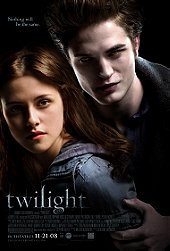 "I'd rather die than to stay away from you."


Adapted from Stephenie Meyer's best-selling novel (the first of four books), Twilight is a sloppy, anaemic tale of forbidden teenage love. Perhaps the biggest fault with Twilight is that the film is damagingly reliant on its source material, meaning that while its reverential nature may satiate the pre-converted (a predominantly feminine fan-base of all ages and lung capacity), it leaves the uninitiated on the outside looking in. See, as a standalone film, Twilight is detrimentally incoherent and condensed - characters are underdeveloped, the plot hardly exists, and story intrigue barely exists. The most important thing to realise about Twilight is that it would be exactly the same movie with or without vampires. Those seeking bloodsucking action will be disappointed - the vampiric themes are just a gimmick, as the central focus of the plot is instead a cheesy, insipid, melodramatic romance fable. 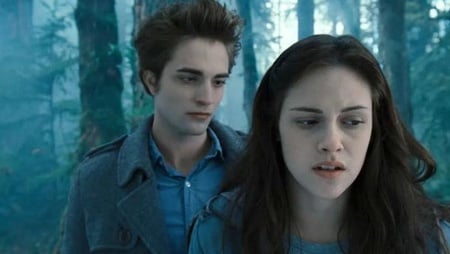 Teenage romance tales usually begin with the protagonist moving to a new school and struggling to cope with this change. Such is the unenviable situation when 17-year-old Bella Swan (Stewart) moves in with her father (Burke) after her mother hits the road with a new lover. Bella soon develops a tight-knit group of friends at school despite her inescapable self-consciousness and awkwardness during social interactions. Another cliché soon appears in the form of Edward Cullen (Pattinson). Edward is the typical bad boy archetype: he keeps to himself and no girls are good enough for him. Predictably, Bella develops an incurable crush on this elusive, dashing young man, and the feeling is mutual. But as their tenuous courtship begins, the reason for Edward's mysterious, withdrawn disposition is revealed: he's a vampire. This does not stand in the way of a romance, though, of course.


Twilight admittedly starts well enough with a promising first act, but then it loses its way. Most detrimentally, it takes an inordinate amount of time for the film to hit its stride - it just sluggishly rattles along for far too long as futile ancillary characters are introduced and Bella & Edward trade bad dialogue while gazing longingly at one another. Of course, this is hardly sufficient to sustain a two-hour motion picture, so some superfluous antagonists are introduced at about the 80-minute mark: an unfriendly pack of vampires, who - for absolutely no reason, other than to lead the plot somewhere - decide to hunt Bella. 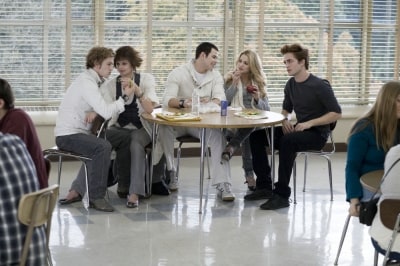 With book sales so massive that the publishers are filled with envy, and with an enormous fan-base completely prepared to lap up anything pertaining to this beloved franchise, it was only a matter of time before Twilight and its follow-ups were adapted as movies. Mind you, the powers that be are not funding these adaptations because the target audience wants to see them - these films are being green-lit because the fans PAY to see them. Otherwise, everyone involved would be stepping up to ensure Meyer's works were skilfully translated to celluloid. As it is, Twilight is a shoddy commercialisation of the source material; compressing things for the sake of time, and incorporating plot points for fidelity reasons that don't flow naturally. Meyer herself even had the final say in the editing room. This reviewer has never read any of Meyer's novels, but, judging by the quality of this feature, has no interest in starting - Twilight is merely a journey to Dullsville on Nosferatu's ratty wings.


Devoid of the book's first-person narration, the chain of events served up in Melissa Rosenberg's adapted screenplay - like the protagonists mutually surrendering to their feelings, Edward's initial and inexplicable hostility towards Bella, and Edward's choice to reveal himself as a self-controlled but still lethal bloodsucker - proceed with zero logic. Furthermore, even with an occasional emo-ish voiceover, the film cannot truly get into the head of Bella Swan, and consequently her decision to get involved with a lethal vampire comes across as stupid and ill-considered. What the fuck do these people see in each other? The film fails to provide an answer, other than the shallow reason that they're attracted to one another. The result is a supernatural romance in which both the supernatural and romance elements feel rushed, unformed and insufficiently motivated, leaving viewers with little to do but shrug and focus on the eye candy. Also, according to Meyer, William Shakespeare's Romeo and Juliet was an influence on Twilight. Evidently, it went completely over the bimbo's head that Romeo and Juliet was a fucking satire! If the titular lovers got married, they would have filed for divorced a few years afterwards. Shakespeare may be regarded as boring, but it's hilarious that he can make someone look stupid almost four centuries after his death. 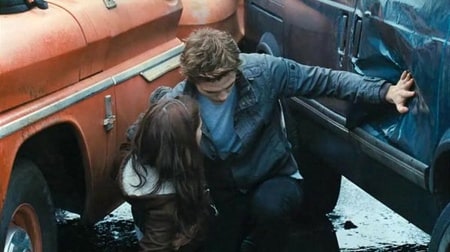 With a more generous budget and a more competent writer, Twilight might - keyword might - have been transformed into a somewhat decent movie. Unfortunately, the film was made on a rather small budget, making it look and feel more like a pilot for a television show. Furthermore, why Catherine Hardwicke was selected to fill the director's chair is truly a mystery for the ages. A film of this scope and sensual edge required a director able to communicate thick torrents of romance as well as dark, violent undertones mixed together to form an arena in which the characters can work out their angst. Hardwicke's sheer inexperience with fantasy and horror is very evident from the outset. The special effects are merely average instead of remarkable, too - when Edward tree hops with Bella, one can virtually see the wires. The depiction of the sparkling vampires in direct sunlight is even worse. The filmmakers turned to ILM for this effect, but - despite their best efforts - Edward's skin looks unconvincing and artificial. Admittedly, though, Twilight is somewhat enjoyable as the momentum builds due to the occasionally engaging atmosphere and a number of excellent soundtrack choices. But don't get me wrong - the film still sucks.


For her novels, Meyer rewrote the vampire rulebook to suit her desires. Meyer's vampires don't have any lethal problems with sunlight, crucifixes, stakes, garlic or holy water. They don't have fangs either. Meyer thus castrated the undead - instead of badass creatures of the night constantly hunting for blood, they casually stroll around on cloudy days and are far too sensitive to bite open the neck of a helpless young girl. There are a few evil vampires in the story, but, given the limitations of the PG-13 rating, they aren't frightening or memorable. On top of the ingrained bloodsucker cinema logic being disposed of, concepts of character motivations and romantic chemistry were ignored too (siblings have more sexual heat than Bella and Edward). Twilight eventually culminates with an exhaustively moronic final act during which the characters suddenly pinball around the country with minimal explanation before arriving at a mirror-filled final showdown arena straight out of the filmmaking 101 handbook. 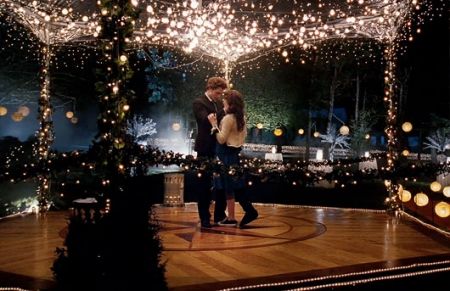 Another major negative of Twilight is the woeful casting. Robert Pattinson is dull as Edward Cullen. Judging by Pattinson's performance and the nature of his character as presented here, it's difficult to fathom why the world's female population swoon whenever Edward's name is mentioned. Pattison's acting is completely soulless and awkward. He may be portraying an emotionless vampire, but he's too uninteresting. Kristen Stewart's awkward line deliveries are also problematic. The interactions between Bella and Edward feel particularly forced, and the script gives Kristen Stewart no chance to convince the audience of her transcendent love for a guy who'd just as soon drink her blood as jump her bones. No-one else in the cast merits much attention. Due to the sheer volume of characters, smaller roles are left without much dimension and the stars portraying these characters are forgettable. Females are welcome to disagree, though, since the men look like they spent time posing for Abercrombie & Fitch catalogues between takes.


It's hard to deny the commercial success of Twilight ($380 million worldwide from a $37 million budget is nothing to sneeze at), which was mainly thanks to the lonely dateless tweens and college gals who embraced Meyer's wish fulfilment universe. But to the outsiders, the experience alternates between embarrassing cheesiness and outright boredom. A viewer will make up their own mind as to whether or not they'll see the film, so it would be redundant to make a recommendation - either one loves the franchise and wants to see the page-to-screen translation, or curiosity (based on the hype) will merely get the better of an outsider.


Unsurprisingly and unfortunately, Twilight spawned a number of sequels, starting with The Twilight Saga: New Moon in 2009.