A new step in the 'found-footage' sub-genre. 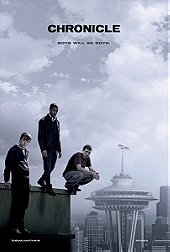 "Yes, it was the black guy this time."

The 'found-footage' sub-genre was popularised when The Blair Witch Project was released way back in 1999. There have been so many found-footage films in the horror genre that they're actually starting to get boring. The thing that's attractive about this sub-genre to many studios is that they cost little to make, yet rake in a lot of profit. One of the latest found-footage films to move into a new genre is Josh Trank's Chronicle. This is sort of like a 'super hero/villain origin story', and it works really well. With a budget of $15 Million, it's really surprising how well the visual effects fall in place with the story telling. Trank, who was 27 when he made Chronicle, impresses so much with his directorial debut, and the film does things that no other found-footage movie has done before, particularly with the camera. 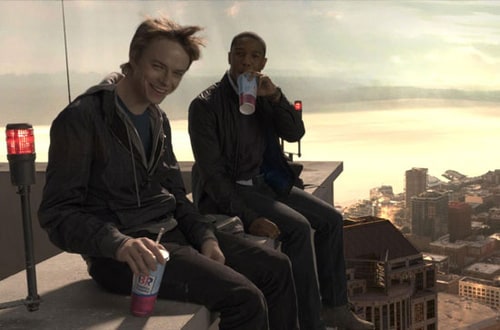 Andrew (Dane DeHaan) is a troubled but creative teen who lives with his sick mother (Bo Petersen) and abusive father (Michael Kelly). He is socially awkward and is often bullied at his high school. To record the hardships he goes through, he buys a handheld camera. When he goes to a party of one of the students at his school, he makes a discovery with his cousin Matt (Alex Russell) and class-mate Steve (Michael B. Jordan), that leads them all to acquire powerful telekinetic abilities. Their new found powers bring them closer together as friends, as they get into all kinds of mischief and develop their abilities. However, their intentions, particularly those of Andrew, turn for a sinister angle. 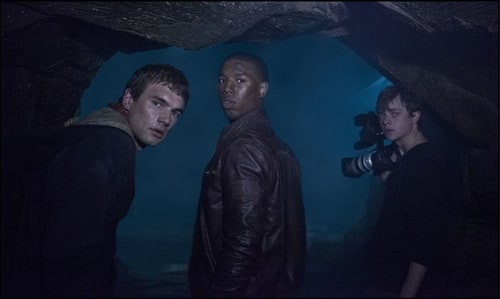 I'll admit, it is hard to write a found-footage script (I've had a try of it). However Trank and writer Max Landis (the son of horror filmmaker John Landis) have come up with a story that transitions quite well into a screenplay. Personally, I found myself relating a lot to the character of Andrew. I'll be frank; I wasn't the most popular kid in high school and I did cop a fair bit of bullying, so I could relate to the pain he was going through. The characters here are terrific in that way - since they're teenagers, many young audiences (probably the target audience for the film) will definitely respond to them. The humour has that hip, teen style to it, and it surprised how funny the film was. It's largely thanks to the character of Steve, who may be seen as a cliché comic relief black guy, but he was likeable character. Also adding to the humour is the way the three friends decide to use their powers, mainly in the fun and games direction (we'll get to the darker side later). They play football while flying and play tricks on people with their telekinesis. The mischievous tone was something I responded well to, and the film's tagline, Boys will be Boys, is a perfect description of this.

Landis' script takes time to develop the characters over the course of the film. Andrew becomes more threatening as he learns to use his powers, Matt learns to be a good person, and Steve starts actually spending time with Andrew (he never did before as he was popular student). These characters are likeable, and Landis does a good job of making the audience care about these friends. But the dark side of things plays into the whole teen angle beautifully. With Andrew living such an unfortunate life, there's something understandable about his development to a darker personality. As teenagers, we are naive and don't think things through. Hell, if I got powers seen in this film, I'd do all kinds of things I'd regret without thinking it through. I liked this theme the movie worked itself around of, and it allows the audience to be more invested with these characters. When Andrew starts using his powers in a negative way, that's when the film takes a darker tone. There's hardly any humour in the final act, but tonal shift wasn't abrupt and had been set-up over time throughout the course of the film. 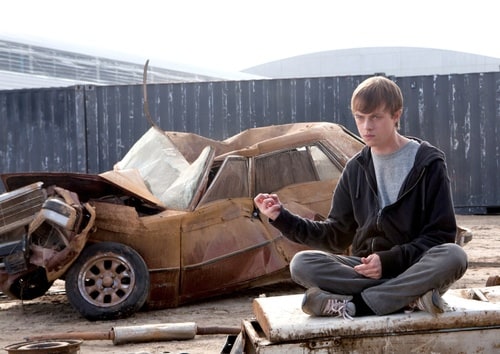 In most found-footage films, the acting is usually atrocious (first-time actors are often hired). However, in Chronicle, the acting is actually really fine. It's definitely surprising as most of these actors haven't been in a lot of roles. As Andrew, Dane DeHaan is excellent - he channels both the light and dark side of his character perfectly. His transformation from vulnerable teenager to badass super villain is fantastic. Meanwhile, Alex Russell brought a commendable performance as Matt, but Michael B. Jordan was terrific, having heaps of fun with his role which definitely translated into the audience. Michael Kelly (Dawn of the Dead, Changeling) is pretty much the only well-known actor cast in this, and as Andrew's alcoholic father, he's fantastic.

Chronicle has a truly unique style as opposed to most found-footage films. Instead of just one camera, the film cuts between different cameras, depending on the scene. For example, at the opening party scene, the film switches from Andrew's camera to another one owned by Matt's love interest, Casey (Ashley Hinshaw). Towards the climax though, this style has its ups and downs. There are moments where they'll use surveillance cameras and other authoritative formats. However, there comes to a point where it gets a bit unconvincing, as the cameras will still capture what the characters are saying (also, Andrew's camera is not in use during the conclusion). Speaking of the conclusion... it's pretty awesome. It's practically a big battle between two superhuman beings shot in a found-footage style - and it works! You can actually tell what's going on, and it's just riveting stuff. The cinematography throughout the film is quite creative, and allows Trank to move out of the typical found-footage look. As the lead characters improve on their powers, they begin to levitate the camera and move it in totally new directions. This allows action sequences to be shot really well, as the hero doesn't even need to be grasping the recorder. The visual effects may not be top-notch, but this isn't a big budget film. At the end of the day, the effects were fine - they didn't bother me, and they were well-integrated with the action sequences. 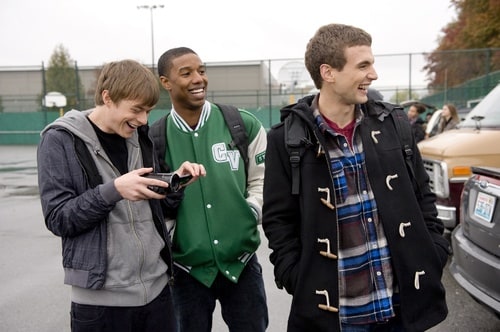 I really do hope that this evolves into a franchise, because there's so much potential here. It finally proves that the found-footage sub-genre isn't a total gimmick after all. As a huge fan of superhero movies, it was refreshing to see one that wasn't based on a comic book. Better yet, it was done in a style I never thought was possible for superheroes. While it's shot in a handheld style, the film has a graceful look, and it delivers on everything you'd want a superhero movie - a hero, a villain, action sequences, sci-fi elements. It's all here. Like I said, this is pretty much a superhero/supervillain origin story, and if we get more that are as good as this from studios like Marvel and DC, I'm gonna be a happy man.