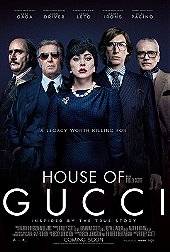 Even though I should have probably given up on Ridley Scott a couple of years ago, the guy keeps coming back with some projects which sound too intriguing to pass on and this movie was a perfect example. Well, even though the material definitely had some potential and even though there was a really cool cast involved (Lady Gaga, Adam Driver, Al Pacino, Jeremy Irons, Jared Leto, Jack Huston, Salma Hayek), to be honest, I wasn’t really impressed by the damned thing after all. Eventually, I’m not sure what was the biggest issue between the directing and the writing. Concerning the directing, sure, the whole thing looked fine but it also felt terribly flat with no tension whatsoever. It seems that Scott didn’t really know how to tackle this material which was rather surprising coming from such a seasoned director. However, the writing was probably even less convincing though. Indeed, even though they had more than 150 mins at their disposal and had therefore plenty of time to properly develop Patrizia Reggiani and Maurizio Gucci, it was most of the time rather unclear what was actually going on with these characters. For example, at first, Reggiani was introduced as being only interested in Maurizio because of his last name and, yet, she seemed rather unphased when he got kicked out of the Gucci family by his father. Furthermore, when she started to loose her grip on Maurizio, she was just way too passive and it is rather bewildering that her only move was to consult a psychic which didn’t seem really effective. With Maurizio Gucci, it was even more problematic though. Indeed, he was first introduced a young gullible law student who was easily manipulated by some attractive gold-digger. However, he became somehow super ambitious, super business savvy and dropped his wife in the process which was quite a U turn from who he was at the start but this evolution was never explained or even actually displayed on the screen. Anyway, to conclude, like many other Ridley Scott features, the damned thing felt like another missed opportunity but I still think it is worth, if only to see Lady Gaga showing once again that she has some really solid acting chops.