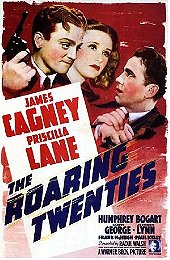 1939 was such a classic, milestone year for film cinema. So many great films, 'The Wizard of Oz' and 'Gone With the Wind' even being masterpieces. 'The Roaring Twenties' had a lot of talent involved, James Cagney and Humphrey Bogart both had career full of great and more performances and Raoul Walsh (in a different film for him at this stage of his career) sure could direct. Also like the genre 'The Roaring Twenties' fits under.'The Roaring Twenties' did not disappoint. While it is quite rightly highly regarded today, considered by quite a number of people a genre classic and great representations of both Cagney and Bogart, it is a shame that it was over-shadowed by a lot of other films that year and doesn't get as much attention. 'The Roaring Twenties' may not quite be a film milestone in the way that the best films from such a great year are, but it is a great film in my view and deserves the high praise it gets.It is not quite perfect, with it being a bit of a slow starter and a film that didn't grab my attention straightaway.Luckily, 'The Roaring Twenties' got going very quickly. And when it did get going, boy did it blister. The photography is atmospheric and very stylish, the noir-ish lighting also adding to the impact. Was amazed at how evocative the Prohibition setting was. The music is appropriately moody without getting bombastic or syrupy and Walsh's direction is remarkably skillful in how vividly the deceptively gleaming yet very ominous at times setting is portrayed. As well in generating suspense.Something that 'The Roaring Twenties' does incredibly well in. The script has a sharp wit and tight tautness, with some quite hard to forget quotes. Cagney's last line, one of his greatest, really stands out, the very last line of the whole film likewise. Also really loved the hard boiled edge exchanges of dialogue between Eddie and George, delivering on the entertainment value too. The story is both entertaining and suspenseful, especially in the exciting final third. Cagney's exit is one of his greatest.Characters are well written, personally found George and especially Eddie (very meaty) very well defined. The acting is just right, Cagney is just terrific in a role that is so perfect for him and one that he played extremely well and better than most in that type of role. Bogart has great laconic intensity and steel, giving one of his best pre-'Casablanca' performances.Altogether, great. 9/10