Small time in the Big Easy 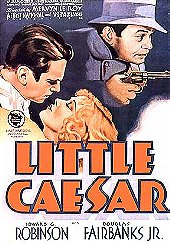 'Little Caesar' had many interest points. Edward G. Robinson was a fine actor, who dominated when in lead roles and stole scenes in support. Mervyn LeRoy, in one of his earliest films here, went on to do a lot of solid and more films. Douglas Fairbanks Jr was good in the right roles and Glenda Farrell also had a knack for scene stealing. Also highly appreciate gangster pictures and have done so for some time now, ever since seeing 'The Godfather' for the first time ten years ago.Is 'Little Caesar' one of the best gangster films? Definitely not, others have held up much better. Regardless of what one's opinion of the film though (and it is an easy target for criticism as well as praise), it is hard to deny that it was ground-breaking and important to the development and history of the gangster film. 'Little Caesar' was also the film that propelled Robinson to stardom and put him on the map, one can completely see why judging from his performance here. It is also one of overall LeRoy's better early films, though he did do a lot better since.Robinson is absolutely terrific in 'Little Caesar'. Tough as nails, smart and deeply charismatic, he dominates every scene effortlessly without getting over hammy. Although the rest of the acting was on the most part not very good, Fairbanks is suitably carefree in an amiable way and Farrell is wonderfully scathing despite her role being thankless. LeRoy's direction has a nice style and verve.The film also looks good, with some noir-ish lighting and inventive enough photography to stop things from looking static. Some atmospheric set design too, and some nice use of sound. The script is generally taut and has the right amount of grit and bite. The final line is unforgettable. The story has the bold tough as nails approach with some nice suspense. The ending is also memorable.Despite Robinson being so great and Fairbanks and Farrell being more than game too, it is a shame that the rest of the acting is really not too good. Being either over the top or wooden, one of the worst offenders being Thomas E. Jackson.Generally the characters are cliched ciphers with next to no development, even Rico himself could have done with more depth. The editing occasionally could have done with more fluidity.On the whole, good and important but better was to come of this type of film. 7/10