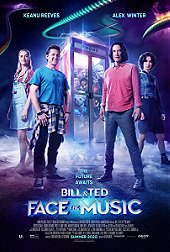 I wasn’t really sure what to expect from this flick but since it was available on Netflix, I thought I might as well check it out. Well, it’s always tricky to come up with a sequel 30 years later, in fact, it is often a rather misguided idea. Anyway, in this case, to be honest, I really struggled to care about the damned thing. The first thing that really bothered me was the whole concept that Missy had first married Bill’s father, Ted’s father, and, for this movie, she was then marrying Ted’s brother?!? Sure, it was supposed to be funny but I thought it was actually seriously cringe-inducing. At least, it was a decent idea to send them to the future (but didn’t they already do it in the 2nd installment? I seriously can’t remember it though…) but it’s too bad this future looked so lame and cheap. At least, I should praise Keanu Reeves and Alex Winter to be still completely committed to these characters after all these years but, as far as I'm concerned, moronic characters are almost never entertaining or funny. I have to admit that it has been years since I saw the previous movies and, while watching this new instalment, I was wondering how I could have ever enjoyed ‘Bill & Ted's Excellent Adventure’ in the first place. I guess I should re-watch this 80’s cult-classic to see if it was indeed much better than anything else that came afterwards in this franchise. By the way, the idea of including their daughters also had some potential but they should have included them from the start and have them time-travelling with their dads, it would have been more entertaining and an interesting departure from the previous movies. Anyway, to conclude, even if the damned thing was harmless, I thought it was actually rather boring and I don’t think it is really worth a look, except if you are a die-hard fan of these characters.