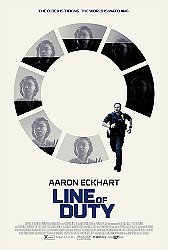 I wasn’t expecting much from this flick but since it was starring Aaron Eckhart and since it was available on Netflix, I thought I might as well check it out. Well, to be honest, it turned out to be even worse than I expected. Basically, they took a very generic and boring action flick and they thought it would be so clever to mix it up with an internet streamer/journalist. Seriously, it has been a while since I have seen a movie with such a ridiculous concept (and, yesterday, I saw ‘Down’ which was about a killer elevator… but it actually worked better than this movie). First of all, there is absolutely no reason and no explanation whatsoever why this cop would accept that this girl would tag along while he is working on a case. Seriously, what was the upside for him? Then, it was just so annoying to hear this girl constantly hammering the fact that she was supposedly searching for ‘the unfiltered truth’ when, in fact, what she was doing was the worst kind of sensationalist journalism. Finally, there is absolutely no way that any network would broadcast this kind of live feed with people getting shot at and even getting killed live on the air. Even on the internet, after a while, they would have just shut this sh*t down. Concerning Aaron Eckhart, he was actually not bad and he did what he could with this abysmal material but it‘s a pity that the guy is spending his time nowadays with such worthless action flicks. Seriously, it is quite a downfall 13 years after playing Harvey Dent in ‘The Dark Knight’. Anyway, to conclude, the damned thing was just pretty bad and you should probably avoid it.