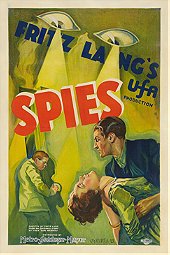 To be honest, I wasn’t really sure what to expect from this flick but since it was included in the list ‘They Shoot Pictures, Don’t They’, I thought I might as well check it out. Furthermore, it was was directed by Fritz Lang and it seemed to have a solid reputation. Anyway, even if  ‘Metropolis’ would eventually turned out to be a timeless masterpiece, it also turned out to be seriously expansive, so Lang decided to make this following directorial effort on the cheap but it was apparently a big success when it was released. And, indeed, I have to admit that I really enjoyed this mix of romance, thriller and comedy with all these genres sometimes colliding in the very same scene. I also enjoyed the concept of a super spy falling in love with a femme fatale without noticing that she was also a spy even if it was actually pretty obvious. Still, even if it was a decent watch, the damned thing was still too long for my taste and, to be honest, the story was really rambling. Finally, the fact that the main Asian character was actually played by a guy from Romania was rather disappointing, even if it was something rather usual back in those days. Still, I really enjoyed the theatrical and expressionist acting and, even if there were properly too many characters involved, they were all so colorful and quite entertaining to behold. My favorite one was probably the character played by the lovely Gerda Maurus who was just so charismatic with her deep blue eyes. Anyway, to conclude, even if it didn’t completely blow me away, it was still a decent silent feature and it is definitely worth a look, especially if you like the genre.