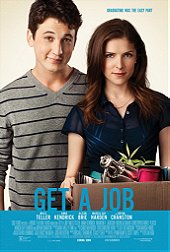 To be honest, I wasn’t really sure what to expect from this flick but since there was a decent cast involved, I thought I might as well check it out. Unfortunately, even though the concept did have some potential, the end-result still turned out to be terribly weak, I’m afraid. The first issue was that, even though the damned thing was really short (not even 80 mins), there were just way too many characters involved with each their own rather underwhelming little story. Seriously, what was the point of Jorge Garcia’s janitor character? It was also rather bewildering that, even though Anna Kendrick was prominently displayed on all the promotional materical and was presented as a lead character, she barely had anything to do through the whole duration. Anyway, the whole thing was just terribly random. Concerning the tone and the approach, even there, it didn’t really work either. Indeed, at first, the idea that everyone has to get a job at some point, no matter what, was actually intriguing but it was completely unclear what the makers eventually wanted to say about this subject. In fact, it could have been really cool if they had gone for a grittier realistic approach. For example, the (surprising topless) scene involving Cameron Richardson was not only entertaining but actually pretty effective and displayed the correct tone that they should have gone for. Unfortunately, instead, they want for some cheap jokes and a bunch of half-baked sub-plots. The ending was also extremely lame. Indeed, after going back-and-forth between being realistic or not through the whole duration, they basically threw everything out the window and went for some completely far-fetched fairy tale ending. Indeed, after all, the main character shouldn’t worry about getting a steady job as, according to this movie, the easiest and smartest thing to do was apparently to start up his own company. Anyway, to conclude, even if the damned thing had some potential, it didn’t care much for it and I don’t think it is really worth a look.