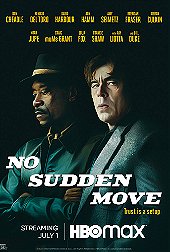 To be honest, I wasn’t really sure what to expect from this flick but since it was directed by Steven Soderbergh and since there was a pretty cool cast involved, I thought I might as well check it out. Well, after going through one of the shortest retirements ever (around 3 years), Soderbergh is back at it, releasing at least one movie each year, even 2 in 2019. Well, even though I actually enjoyed this crime thriller which was so much grittier than the ‘Ocean’s Eleven’ franchise, like most of Soderbergh’s work, even if it was really stylish, the end-result still felt rather empty. By the way, Soderbergh apparently did experiment with some anamorphic lenses and, as a result, the image was very often distorted on the edges which was rather distracting. Concerning the story, since it was a néo-noir, it was at times rather convoluted but it is inherent to the genre. Indeed, one of the pleasures of this movie was to figure who was who and what the hell was going on. I wonder if it would be interesting to see it again at some point, to see if I could better figure it out, but I’m afraid I would discover plenty of plot-holes since I’m not sure that everything did make sense. Still, I did like the cynical approach as not only the police forces turned out to be crooked but the biggest gangsters of the whole bunch turned out to be the leaders of the huge business corporations. However, it was pretty weird that the whole thing became suddenly some kind of ecological pamphlet towards the end. Anyway, to conclude, even if it was nothing really amazing, it was still a decent watch and I think it is worth a look, especially if you like the genre.