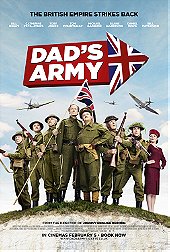 To be honest, I wasn’t really sure what to expect from this flick but since I have a weak spot for Catherine Zeta-Jones, I thought I might as well check it out. Apparently, it was based on a popular old British TV-show which I have never seen but, unfortunately, this remake turned out to be terribly tedious, I’m afraid. First of all, to make a comedy around WWII is not impossible but it is really difficult and, in this case, it was a rather cringe-inducing attempt. Indeed, through the whole duration, I couldn’t help thinking about all the horrors taking place in the rest of Europa while this group of pathetic and either idiotic or senile old guys were basically 'playing' soldiers. Eventually, the only one in this group who was slightly less annoying than the rest was the character played by the always charismatic Bill Nighy. However, even if Nighy did what he could with this rather abysmal material, his character was still ruined by the fact that the guy didn’t think for one second that it was rather weird that such a woman way out of his league would try to seduce him. At least, Catherine Zeta-Jones was as usual quite gorgeous and she was a perfect choice to play such spy/femme fatale. Still, even her character was ruined by getting involved in such an inane conspiracy. Indeed, to try to convince the viewers that the key to win WWII was supposedly to infiltrate this very small community and this Home Guard platoon was just completely ridiculous. Anyway, to conclude, even if I have to admit that the damned thing was rather harmless, I just really didn’t like at all and I don’t think it is worth a look.