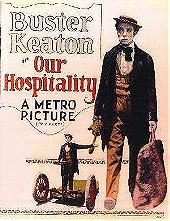 Even though I grew up watching the movies of Charles Chaplin, I have always been rather oblivious regarding Buster Keaton and I discovered his work much later as an adult. Eventually, I wonder what I would have thought of his movies if I would have seen them when I was a kid because back then, I loved Chaplin (I still do). Anyway, coming back to our main feature, it was definitely quite entertaining. First of all, even though it was shot almost 100 years ago (by the way, the version I saw on YouTube was of a pristine quality, it’s too bad there was some interruptions every 5 minutes for some damned commercials), the action was taking place almost a 100 years before so Keaton had obviously a lot of fun recreating this time period. Indeed, New York was pretty much unrecognizable and there was a long sequence involving the strangest little train I have ever seen. In fact, this train was actually accurate to the time period. There was also a hilarious vintage bicycle at the beginning. Concerning the story itself, it might sound like a drama but, in the hands of Keaton, it became quite a farce with many  incredible stunts and even more visual gags. To be honest, at the end of the day, I have to admit that it was still slightly too random for my taste. Furthermore, you might wonder if the material was enough for a feature length movie as every joke was stretched for quite some time so a shorter version might have been more effective. Anyway, to conclude, it was still definitely a solid silent comedy and it is definitely worth a look, especially if you like the genre.