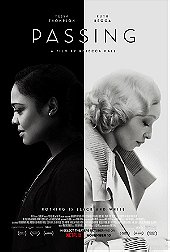 Since I kept hearing some pretty good things about this flick and since it was available on Netflix, I thought I might as well check it out. Well, I have to admit that Rebecca Hall really impressed me with her directorial debut. Indeed, she gave such a heartfelt and fascinating look on the complexity and the hardship it might entail to be black or Mixed-race in the US back in the 20’s (but you could say that it still does apply for today I’m afraid). Of course, at first, you would be inclined to blame Clare for the choices she made but it is actually fairly easily to judge her if you (like myself) are white and have enjoyed all the privileges of the white middle-class through your whole life. Furthermore, even though Irene made a more moral choice, she hardly seemed to be happier than her friend. And that’s the heart-breaking conclusion made by this movie, the fact that every black and woman are stuck in some jail, no matter the choices they might make on how to live their lives. Indeed, what choices do they have? Since they are black, they always will be at best marginalized, bullied, discriminated and, in the worst-case scenarios, they might even get killed by some angry mob or some average cop just because they were at the wrong place at the wrong time. By pretending to be white, even it might seem to be morally wrong, there would be some clear advantages to be part of the ruling class. However, as displayed in this movie, by making this choice, they would just end up in another kind of cage. Another option might be to actually leave the country, an option argued a couple of times by Brian, Irene’s husband. The only thing I was missing was that I never really understood why Irene and Brian were so obsessed by Clare though but it wasn't a deal-breaker. Anyway, to conclude, it turned out to be a rather simple but intense drama and it is definitely worth a look.