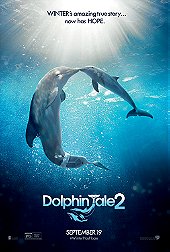 I wasn’t expecting much from this flick but since there was a decent cast involved, I thought I might as well check it out anyway. I did watch the first instalment (mostly because my stepson was so enthusiastic about it) but it was years ago and the only thing I could remember was how much it did bore me at the time. Anyway, coming back to this sequel, I have to admit that the people working at the Clearwater Marine Aquarium all seemed to be doing an incredible work. Furthermore, it seems that everything displayed was scientifically fairly accurate and I guess the makers should be praised to have kept the BS to the bare minimum. Still, at the end of the day, it was just rather poorly written. Indeed, there was just no pulse whatsoever, the whole thing felt rather lifeless and, eventually, in my opinion, it wasn’t much better than a very long commercial for the CMA. On top of that, it didn’t help that Nathan Gamble was not charismatic at all and, even if Cozi Zuehlsdorff was slightly better, she didn't really impress me after all. To ‘support’ them, there were just way too many actors involved, some fairly famous (Morgan Freeman, Ashley Judd, Harry Connick Jr. , Kris Kristofferson) and a whole bunch of unknow actors. They all had not much to do, except for Harry Connick Jr., and they all showed up for only a couple of (usually useless) scenes. Seriously, the makers were so desperate that they even did include some kind of sentient pelican who was obviously supposed to be hilarious. Anyway, to conclude, even I will have to admit that this movie was completely harmless, it just didn’t care at all about the damned thing and I don’t think it is really worth a look, except if you really like the genre.